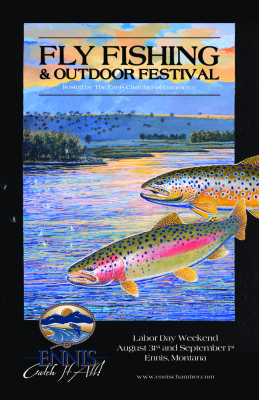 Event expands to include all outdoors, something for everyone

ENNIS - John Way, owner of The Tackle Shop, in downtown Ennis, was cranked up about the upcoming Fly Fishing and Outdoor Festival coming to Ennis Labor Day weekend, August 31 – September 1.

“It’s gonna be great,” Way said. “This is a cornerstone to the community, the end cap to the big (fishing) season, a great way to bring people in and make the cash register ring up and down Main Street.”

“Fly fishing is still the main focus,” said Ennis Chamber of Commerce Executive Director Halley Perry, “but this year’s festival won’t be like others in the past. We’ve expanded it to include more of the great outdoors.”

“The outdoor aspect is really new,” said Perry, “in the past the events tended to focus on the same things. This year we wanted to expand things and bring families into the event, include all of the outdoors”

The Ennis Chamber of Commerce is officially the event host for this 15th Annual Fly Fishing Festival, now expanding to the outdoors.

Perry and Way are excited about the line-up of presenters and exhibitors at the festival, too.

Presenters include the following:

• Bob Jacklin, of Jacklins Fly Shop, in West Yellowstone, will also be presenting. Jacklin is an outfitter and guide, a Federation of Fly Fishers-certified master caster, who offers free casting clinics each summer, on Sunday evenings, will do a presentation.

• Montana Raptor Conservation Center – Since 1988, the Raptor Center is all about hawks, owls, eagles, falcons and other raptors. It rehabs injured raptors, conducts community education about these fascinating birds and partners with others for raptor conservation and research.

• Craig Matthews – Fly-fishing legend, angler and fly-tyer extraordinaire, Craig Mathews, of West Yellowstone, will talk about fly fishing. Matthews, Rod & Reel’s 2005 Angler of the Year, and his wife Jackie came to West Yellowstone, Montana in 1979 to become the town’s police chief and police dispatcher. They founded Blue Ribbon Flies a year later, employing handicapped fly tiers and tying flies wholesale for major retail outlets. Matthews retired from police work in 1982, and went full-time into fishing: Since then, he has written dozens of articles for fly fishing publications, authored or co-authored six books, produced a number of DVDs about fishing and developed several famous fly pattens, like the Sparkle Dun.

• Zoo Montana – The Billings-based zoo will be bringing baby animals for kids see and learn about, according to Perry.

• Camp Bullwheel – This is a new entry to the festival, Perry said. Founded in 2017 by friends Peter Pauwels and Frank Bell, Camp Bullwheel provides an adaptive fishing program for individuals with disabilities, and will demonstrate a one-armed fly rod casting system

• Dan Delekta, of Beartooth Fly Fishing, near Cameron, will do a presentation. Delekta has guided on Montana’s trophy trout rivers for more than 30 years. He built the Beartooth Flyfishing Lodge in 1989, with the help of friends, and has since designed more than 800 patterns that are the trademark Delektable™ collection

• Kelly Galloup, of Kelly Galloup’s full service Fly Shop, Lodge, and Guide Service, The Slide Inn, will also do a presentation. Galloup is a streamers expert, a great way to target trophy trout.  His Slide Inn is known for having one of the finest streamer selections in the country.

The Ennis Chamber of Commerce is still accepting applications for vendors

Some of the other highlights of the festival include:

• Casting competition – Perry said there will be various categories to compete in, including  amateur, professional and women. Also, Bull Wheel Camp is sponsoring a one-handed casting competition. In all of these efforts, distance wins.

• The Madison Valley Public Library will be hosting some children’s programs.

• A film festival will feature “Match the Hatch.”

• The Madison Conservation District will host a mini-film festival and talk about conservation.

• The Montana Department of Fish, Wildlife and Parks will offer presentations.

• A raffle will be held, including offerings from Art by Bernie – Riverside Gallery (he did the poster for the festival), and the money raise will go back into next year’s festival, to perpetuate the event.

• There will be a barbeque and live music from Fools Gold.