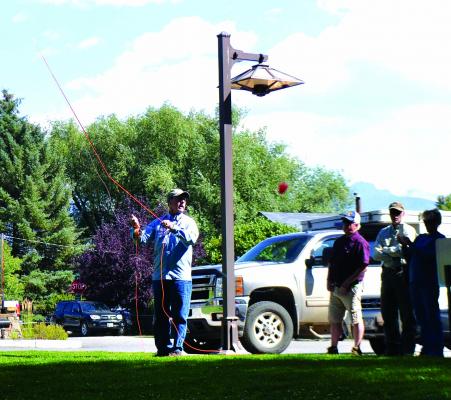 ENNIS—The wrap-up to Ennis’s summer season brought hundreds of fly fishing enthusiasts from all over the west to Peter T’s park last weekend. The Fly Fishing and Outdoor Festival featured something for everyone: dozens of vendors, several films, art, speakers, clinics, food and music.

Things kicked off on Friday, August 31, with speakers from the Yellowstone Nature Connection and authors Craig Mathews and John Juracek, who have written multiple books about fly fishing in and around Yellowstone.

A two-hour casting clinic took place behind the First Madison Bank building, where visitors could watch an expert caster before trying their own hand with some practice casts in the lawn.

Also on Friday was the second annual Montana Conservation Film Fest at the Madison Theatre. The festival included six films and covered topics from trout management and sage grouse habitat to landscape restoration and the local Madison Stream Team.

Another speaker session featured Peter Pauwels and Frank Bell of Camp Bullwheel, which is located on Varney Road outside of Ennis. Camp Bullwheel is a nonprofit that facilitates river floats and fishing trips for people with disabilities.

Pauwels spent over two decades working at Craig Hospital in Denver, where he had access to a full laboratory of the materials and technology used for crafting prosthetics and to electronically automate them.

After some tinkering, he created a line of adaptive fishing gear, including a single-handed casting apparatus for fishermen who only have use of one arm, and an adaptation called the “sip and puff” method, which allows someone who is paralyzed to cast using only their breath. Pauwels says the Madison River is the perfect place to put the equipment into practice.

“There’s such easy access here on the Madison, and the ramps make it so easy to get into the river,” says Pauwels. “And obviously, the fishing is just fantastic. It’s an ideal place to be doing something like this.”

Both Pauwels and Bell have spent years in the area and run the camp out of a house they purchased and renovated. They hope to fundraise enough to build a new and completely accessible facility to allow visitors to stay, with their caregivers and families, to experience a true taste of Montana.

Saturday also featured one of the most anticipated events of the festival: the casting competition. The competition featured categories for youth, women, single-handed, angler and expert casters.

The Fly Fishing and Outdoor Festival ended with a barbecue dinner from Red Apron Catering, as well as a homemade pie sale and live music from local band Fool’s Gold. Dancing, drawings and a live auction wrapped up the festival and Labor Day weekend.