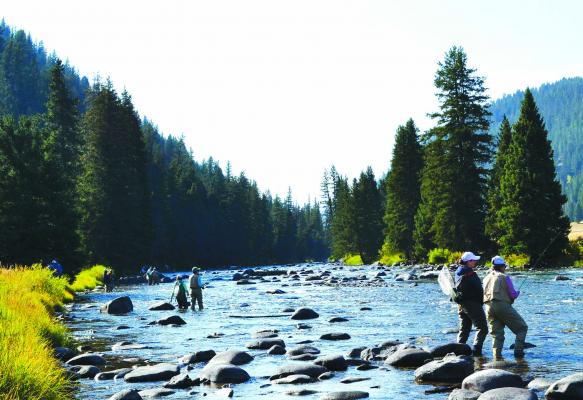 ENNIS—Terri Hogan went on a retreat in 2011, a breast cancer survivor adjusting to life post-battle. She spent two and a half days at Lone Mountain Ranch in Big Sky with 13 other women, all of whom were survivors just like her, with their own stories and struggles.

But the retreat Hogan attended was unlike any other support group or survivors’ retreat she’d seen before. It was a fly fishing retreat, open only to applicants who have struggled in the past or are currently dealing with a breast cancer diagnosis.

“You can look around the room at these 13 other women and know that you’re all coming from the same place and having gone through the same thing,” says Hogan. “For some of them, it’s their very first support group of any kind.”

But, why fly fishing?

“There’s a big trend right now in nature and the power of healing,” says Lise Loselle, marketing director for Casting for Recovery, the nonprofit organization that puts on retreats like the one Hogan attended. “You go outside and there’s something really calming and centering about that. Plus, there’s a very low benchmark for entry. You don’t have to know how to fly fish to come on one of our retreats.”

On top of that, there’s an element of physical therapy involved as well. The gentle and repetitive motion of casting a fly rod helps to gently mobilize and strengthen the shoulders and upper body, which are often the most adversely affected parts of the body during and after breast cancer treatment.

After her own retreat experience nearly eight years ago, Hogan immediately joined the other side of the equation: she became a volunteer. Casting for Recovery brings together groups of women in 68 retreats in 45 states, blending camaraderie and support with the calm, ease and beauty of a river environment. A chance to let go of the stress and strain of a cancer diagnosis and simply be.

Hogan is now the project coordinator for two of Montana’s three Casting for Recovery retreats. Aside from 10 staff employees of the nonprofit’s national office, all 60 retreats are pulled together by nearly 1,600 volunteers, from hospitality specialists like Hogan to nursing staff and fundraisers, social workers, river guides and fly fishing instructors. Many of them are volunteers who love the organization so much, they return year after year to help out.

Casting for Recovery was created in 1996 and for its first 20 years was based in Vermont. But in 2017, the nonprofit moved its national office to Bozeman, the better to work closely with some of its biggest supporters.

“We have a lot of local support, which is part of why we moved our headquarters to Montana,” says marketing director Lise Loselle, who is based in Bozeman herself. “We’re ingrained in the fly fishing community.”

When retreat attendees arrive on Friday afternoon, the first thing they do is share a meal with the whole group for the weekend and become acquainted. Saturday is filled with a series of programs on everything from fishing technique and the local river habitat and even entomology classes on the insects their trout quarries feast upon.

There’s also a closed session with only the retreat attendees and medical professionals, where the women can ask some of the hardest questions they have about the breast cancer struggle: questions about issues with their spouses, problems with their employers and self-image after a harrowing treatment process. And chances are, if one woman has a question she’s afraid to ask, someone else has probably thought about it too.

“The part I love so much is watching these women form relationships,” says Hogan. “It’s just amazing.”

For the Montana retreats, each woman is paired with a local longtime fly fisherman or fisherwoman. With a personal guide and armed with the knowledge from the previous day’s programs and discussions, they spend the day on the rivers, putting their new skillset to the test and soaking in some of Montana’s greatest scenery.

“The vast majority of these women have never fly fished before, so they appreciate the extra help,” says Hogan. “You wouldn’t believe the generosity of these people.”

And that generosity stretches beyond the fishing guides. Hogan says the nonprofit has one woman in Livingston who one year hand quilted an end-of-retreat gift for each attendee. Another made homemade caramels, which she distributed to guests and volunteers alike.

Financial support has also been generous, says Loselle. In addition to local retailers like Orvis and Ennis’ Tackle Shop, supporters of Casting for Recovery donated over $34,000 on Giving Tuesday back in November, the first Tuesday after Thanksgiving thanks to Facebook fundraising, donations on their website and one private donor’s $10,000 match.

It’s an important element of the organization, since no woman ever pays to come on one of CFR’s retreats. In its nearly 23 years, the nonprofit has served over 9,000 women in 45 states, Canada, the UK, Ireland, Australia, New Zealand and Italy.

And for the retreat attendees, the benefits go far beyond the end of their weekend. Take it from Terri Hogan. Eight years after her own start with CFR, she has no plans to stop her work with the Montana retreats.

“You leave with friends, having met these women who have gone through the same thing,” she says. “They’re leaving on Sunday and exchanging phone numbers. They keep in touch.”

In 2019, CFR will host three Montana-based retreats, one of which will be hosted by Madison Valley Ranch in Ennis the weekend of June 7-9. There will also be two retreats in September, northeast of Missoula in the Lubrecht National Forest September 6-8 and at 320 Guest Ranch in Big Sky September 13-15. With 952 women set to take retreats in 2019, CFR is set to have touched the lives of 10,000 breast cancer survivors by 2020.