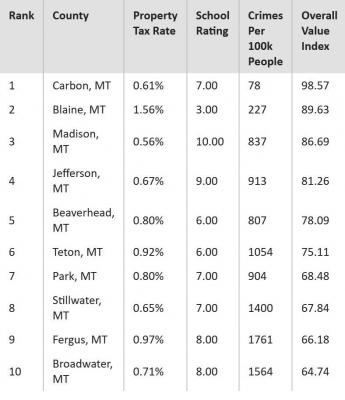 The company's fourth annual study on property taxes reported which counties are getting the most “bang for their buck,” using data on the quality of local schools and the local crime rates.

“Our study aims to find the places in the United States where people are getting the most for their property tax dollars,” the report reads. “To do this we looked at school rankings, crime rates and property taxes for every county.”

To measure the quality of schools, the company calculated the average math and reading/language arts proficiencies for all the school districts in the country. Within each state, these schools were then ranked between 1 and 10 (with 10 being the best) based on those average scores.

Crime statistics were included in the analysis, based on violent and property crimes per 100,000 residents. Using the school and crime numbers, the company calculated a community score, which was then compared to the county's taxes.

The report concludes that Montana's effective tax rate of 0.87 percent is relatively low compared to the national average of 1.19 percent. “In part, rates in Montana are low because the system is structured to reduce the burden on homeowners,” the report reads. “Owner-occupied residential properties are eligible for a 47 percent exemption, far higher than the exemption offered to commercial and industrial properties.”

The top five Montana counties for tax value, according to the report, are Carbon, Blaine, Madison, Jefferson and Beaverhead. The full study and a description of the methodology can be found at https://smartasset.com/taxes/montana-property-tax-calculator#map.