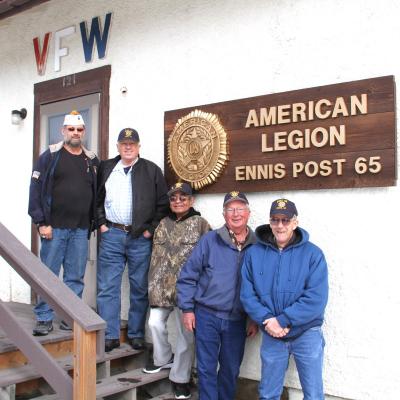 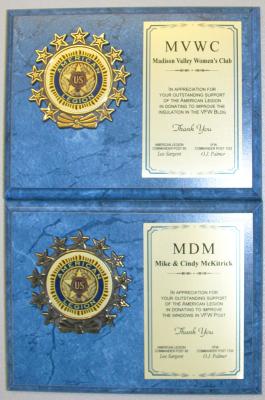 ENNIS – Teamwork is an important aspect of many occupations, but nowhere is teamwork more important than during military service. Every service member has an important job, with others relying on him or her to get the job done right.

The importance of teamwork is drilled into the fiber of every service member, starting in basic training and continuing throughout their military careers. If one member of a basic training platoon fails, the entire platoon fails, and the entire unit suffers together through grueling physical training drills. The purpose is to teach the importance of individuals to the team, and to teach soldiers and sailors to help their struggling comrades, even when they are struggling themselves.

The spirit of teamwork carries over when troops become veterans, and that spirit is on display in Ennis, where two veterans groups have banded together to help each other out. The results have been quite remarkable.

The American Legion and Veterans of Foreign Wars posts in Ennis were struggling before the veterans recalled their lessons from basic training and started working together again. Now, both posts are thriving and membership has increased dramatically.

Two leaders are responsible for the re-birth of the two posts: Ennis American Legion Post Commander Lee Sargent and Ennis Veterans of Foreign Wars Post Commander O.J. Palmer. The two leaders have set an example of teamwork for their members and the community. It's important work, too, because Legion and VFW posts across the country give veterans the opportunity to band together, enjoy the company of fellow veterans, and take on a multitude of patriotic and community projects. In many small towns, lacking good leadership, local posts have closed their doors and disbanded.

Sargent served as an artilleryman in the Army's 1st Infantry Division at Fort Riley, Kansas, between 1963-1965. During the Cold War, Soviet and American scientists worked overtime to develop new and improved weapons of mass destruction. As luck would have it, Sargent served in the first nuclear-capable howitzer battery in the world. Sargent's 155mm howitzer battery was equipped with W48 nuclear shells that would explode with the force of 100 tons of TNT.

Following his military service, Sargent worked as a machinist for 33 years, retired, and moved to West Yellowstone in 1999, where the hard-working vet found a job as a truck driver. Fellow veterans in the small town recruited Sargent to join the American Legion and convinced him to become post commander in 2003. Sargent served with distinction as West Yellowstone post commander, increasing membership from 11 to 41.

In 2014, Sargent and his family moved to Ennis, where the Legion post had been inactive for several years. Higher-ups in the Legion took note of Sargent's move and realized his leadership could help re-vitalize the Ennis post.

“In 2014, we moved to Ennis, and the Legion post was dormant,” said Sargent. “They had no meetings since 2008. The Legion State Adjutant called me and said, “Well, you're in Ennis now, and they need a commander down there.'”

Sargent was reluctant to become commander in a place he had just arrived. “I thought people were going to throw me out of town if I just came in and said, 'I'm your new commander,'” he said.

But with urging from Ennis Legion member Howard Goltz and the Legion higher-ups, Sargent agreed to take the job.

As the new commander, Sargent set about his tasks of recruiting and re-energizing the post. “I just started walking around and meeting people because I was new in town,” said Sargent. “Everybody I walked up to, I asked if they were a veteran and if they were, I'd ask them to join the American Legion.”

Thanks to his outgoing personality, Sargent quickly met many Ennis residents, one of whom turned out to be great ally.

Sargent was at the Ennis post office one day and noticed a man receiving a a package of flags. Striking up a conversation, Sargent met Ennis VFW commander O.J. Palmer, who was picking up flags for the local Cub Scouts.

During that first chat at the post office, Palmer offered Sargent the use of the Ennis VFW post building for Legion meetings. “That's where we got a home,” said Sargent.

“The American Legion was dead here,” said Palmer. “I was very strong for putting the two together in this building and we have. We're all veterans; we all need to work together.”

The two veterans groups have worked together ever since - helping with community activities, honoring veterans, supporting each other's recruiting efforts, and fixing up their building on Third Avenue.

But the spirit of mutual aid extends far beyond the walls of the veteran's hall. As the two groups developed a good partnership, they found renewed support from the Ennis community. During lunch at the Ennis Senior Center, Sargent mentioned the building project to Woman's Club president Lynn Foreman, who took the issue to her group and provided a generous donation to have insulation installed. After Mike and Cindy McKitrick learned about the project, MDM Construction installed all new windows in the post home free of charge. The VFW provided funds for a new propane furnace.

With an improved building for post and community activities, both groups have focused on increasing their membership. Down to 15 members when Sargent arrived from West Yellowstone, the Ennis Legion has increased its rolls to 64 members. “We're number one in the state of Montana for meeting our goal,” said Sargent. “They announced it at the convention that Ennis was number one. It's a really good feeling that our post got that honor.”

Both post commanders help each other with recruiting. “If he tries to get a Legion member and somebody doesn't want to join, but wants to join the VFW, he will bring us new VFW members,” said Palmer. “I do the same thing for the Legion. I talk to people and if they're not qualified for VFW, I tell them to join Legion Post 65.”

To demonstrate solidarity, the two posts now march together in the annual Fourth of July parade. “It really helped when we marched in the parade together,” said Palmer. “We were flying the VFW flag and the American Legion flag and we did it together. I've been very adamant about that. It is togetherness. We have done everything together.”

Local VFW and American Legion post members conduct a variety of community service projects, such as a Veterans Day dinner and program at the school, and honors at veterans funerals. Last summer, Sargent and Palmer collaborated to re-form an inactive Cub Scout troop. “The scouts were dead for three years in Ennis,” said Palmer. “Lee and I got together and we co-sponsored the scouts back again. We now have Cub Scouts in Ennis with 19 boys who come to this post every Thursday night.”

Sargent wants veterans to know why it's important to be members of large, national veterans organizations. “Numbers are important to the American Legion when they go to Congress in Washington, D.C.,” he said. “There's only a couple of veterans in the whole Congress up there and they don't understand what it's like to be a veteran. When they become a congressman, their family gets free medical, and they get free everything and all they have to serve is one term and they get 100 percent retirement.”

“If we can tell them we have 5 million members and they vote, that's lobbying power to protect VA clinics and veteran benefits,” said Palmer.

New members are not required to be active with local posts. “You don't even have to come to meetings, but it's important to join,” said Sargent. “It's only $35 a year. You can go out and beat on doors like I'm doing, but nobody's going to make you do anything. We have a lot of fun.”

“It's part of being a veteran,” said Palmer. “You served your country and you need to continue serving. People have families and other duties; I understand that. I just hope people would join. Once or twice a year, you can do things like the parade, you can help do funerals, you can do a few things and it really does help.”