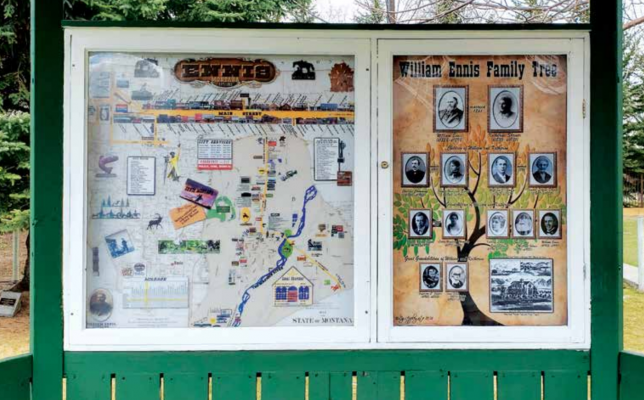 After months of research and photo editing, ringleader and historian, Zoe Todd and graphic designer Liz Applegate have produced a Family Tree display of the William and Katherine Ennis Family. The tree features photos of William Ennis, Katherine Shriver, and their children, grandchildren, and great-grandchildren. Dates of the family members range from 1828 to 2014. Information was researched in the "Pioneer Trails and Trials" book, along with photos and a pen and ink sketch of their mansion which was built in 1881 and destroyed by fire in 1917. The first volume "Pioneer Trails and Trials" spans the early days of settlement from 1863 to 1920. The second, "Progressive Years", continues from 1920 to 1950. Additional information was obtained from "All Shall Be Remembered, Book Two" by Sue Ren, Madison Valley cemetery historian, and Zoe's cousin. These are a series of seven books that explore cemeteries in Madison County and reveal secrets and the life and times of early pioneers. Missing vital statistics were researched and verified by genealogist, Danette Clark.

A little history of the park: Grandma Ennis donated the land to the City of Ennis for a park in 1931 for the benefit of the community. Singleton Construction donated the gazebo in 1991. John Clark, former mayor, Joe Lopez, graphic designer, and Zoe conceived the idea for the exhibit cases which contained a large Ennis Town map. This hung in the gazebo from 2004 until it was revised in 2014 by Liz. Visit the gazebo on Main Street, Ennis in "Grandma" (Katherine) Ennis' park located between the Riverstone Art Gallery and the Ennis Pharmacy to view the Ennis Family Tree. The exhibit was beautifully printed by Signs West of Ennis.