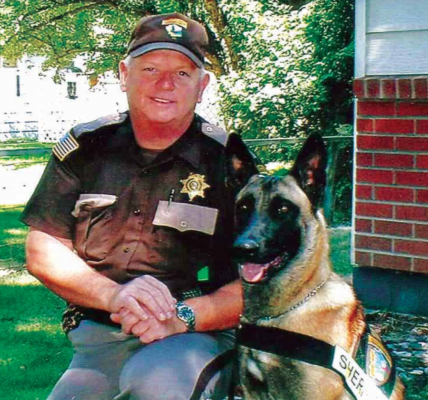 He’s lucky to live and work in the greater Sheridan and Madison County community he was born and raised in. Lucky in 1973 to marry a gal from Alder, Mary Ann. Lucky to have been able to bring a successful K9 program to the Madison County Sheriff’s Office. And even after the recent passing away of his K9 partner Shay, he feels lucky to receive an outcry of support wherever he goes, often in unexpected places from unexpected people.

Deputy Birdsill brought his lifetime dream to work with a K9 to life in 2004. Armed with the passion and determination to take on the time and energy intensive task, he had a plan already in place which would require no taxpayer cost to bring a canine drug detector to the MCSO. All Birdsill had to do was convince Sheriff Dave Schenck a K9 was a fit for the department.

Birdsill offered to take all his vacation funds to pay for the program; he would use his own savings. He would buy the dog, cover its healthcare, its food. He confirmed the dog’s insurance would be covered under the department’s plan at no extra cost. “Whatever way I could, by hook or by crook, I would get it done,” he said.

Sheriff Schenck recognized Birdsill’s passion and ultimately approved of the plan. The sheriff made it clear the department would make time for Birdsill to get the puppy trained as well as cover the costs of incidentals as needed. As it turned out, the community also wholeheartedly approved of the plan. Vets in Ennis and McAllister took turns donating food, and the vet in Twin Bridges covered veterinary care.

Finding the right dog for a K9 job isn’t as easy task. That’s where Deputy Birdsill’s luck came into play again. A golden opportunity arose via the Forest Service which was starting a pilot K9 training program in Fort Harrison in Helena. The pilot training class was full up, but Lady Luck appeared once more when a spot opened up just in time.

Long story short, Birdsill made some contacts, and in the end, a Belgian Malinois puppy suitable for police work was located – enter K9 Shay. The dogs usually sold for about $1,500, but ultimately the breeders, fellow police officers, agreed on a final price tag of around $400. The pup met his future best friend Deputy Birdsill at just eight weeks old.

It was onward and upward from there. Shay’s academy training began at seven months old. “Which is really, really young,” said Birdsill. “Shay took to the trainers like fish to water. You could tell he understood, and you could have real conversations with him. He was just one of those once, maybe twice-in-alifetime dogs, I swear to heaven he could understand English, and had to, to a certain extent.”

After completing 10 weeks of training at Fort Harrison, Shay, not even a year old, was officially a certified K9. Another training opportunity arose soon after for a second certification before his first birthday. “And he was good,” recalled Birdsill. “I’m not just saying that because he was my dog. He was good all by himself, and I was just the idiot at the other end of the leash.”

A call in to the MCSO regarding a crew of rowdy motorcyclists initiated K9 Shay’s first drug bust. An Ennis hotel reported that the group had raised a ruckus and had just left the property. Several officers, Birdsill and Shay located the bikers at the Town Pump gassing up to leave town. As the other officers chatted with the suspects Shay quickly pinpointed one bike.

“He sat down in front of it like his butt was full of lead, and pointed at it with his nose, that’s was his alert” said Birdsill. The owner of the bike was located, he consented to a search, and offered to take his paraphernalia out of the luggage bin. He dug through his clothes, pulled out a shaving kit, unzipped it, and handed Birdsill an Altoid tin with a quarter of a marijuana joint inside.

“Through all that stuff, and in that sealed luggage area, Shay was able to pick that tiny amount up,” said Birdsill, who did not find anything more on the biker. “It probably made those other guys think, ‘Man, I’m glad I smoked all of mine the night before.’”

A few baggies that once held marijuana were located by the other officers back at the hotel. The men received disorderly conduct, possession and paraphernalia charges, met the judge in Ennis, paid their tickets and went on their way.

“How proud was I?” said Birdsill, tearing up as he paged through his scrapbook full of newspaper clippings of Shay’s many recognitions. “It was like, boom, this stuff really works for real.”

Another noteworthy police encounter took place in Silver Star in 2011. The MCSO received a suspicious person call from a concerned son whose mother resided alone there. The worried son described a strange man who had taken up residence in an old, beat up motorhome.

Birdsill and K9 Shay took the call, “hustling their buns” over to Silver Star. The circumstances were odd from the get-go, said Birdsill, who described the location as basically just a little trail beaten into the tall grass off a dirt road. The duo pulled in cautiously, locating the small motorhome as well as a man standing outside with a bulldog tied to the bumper.

Parking a way’s back, Birdsill got K9 Shay out and approached the situation with caution. The man looked at Birdsill, looked at Shay, and pulled his hands out of his pockets when requested to do so. He gave what Birdsill learned to be a false name. The deputy asked him to put his hands up, and not make a move. “I said, ‘Not one single move, until I tell you to, or you’re going to have a really bad day,’” said Birdsill.

Shay sat nearby, shaking a bit, armed with a bark as big as 300-pound Saint Bernard. The suspect was handcuffed without incident. He kneeled in his cuffs while Deputy Birdsill fished the man’s wallet, containing his ID, out of his back pocket. After running the info through dispatch Birdsill learned the man, Frank Fellows, was not just an average suspicious Joe – this fellow out of Pennsylvania was a felon on America’s 10 Most Wanted list.

Birdsill took Fellows into custody without incident, “Just because of Shay, that’s all there was to it,” he said. “If Shay hadn’t been there, I have no doubt in my mind that this guy would want to do something, shoot at me, wrestle me, or some stupid thing and one or both us would have gotten hurt badly. One thing I always say is, if you run from a police dog, you just go to jail faster.”

Birdsill placed Fellows in the back of his Ford Expedition patrol car which was partitioned in the back to allow a prisoner on one side and the K9 on the other. There was just enough space for Shay to look over into the other side, “He just had this constant, low-toned growl, and he stared at that guy all the way to the sheriff’s office,” recalled a proud Birdsill. “It was teamwork at its best.”

Many other successful encounters would ensue in Shay’s 12-year career before he enjoyed four years of retirement. He passed away at 17-years-old on Jan. 25, 2021. Birdsill, who spent his every waking hour with Shay, said he’s been overwhelmed his community’s support following Shay’s passing.

“He ate with me, slept with me, cried with me, played with me,” said Birdsill, choking up as he described their unique and enduring relationship. “It sounds so corny, but it’s absolutely the truth. I spent more time with him than I did with my wife. His footprints are embedded in me.”

Shay’s legacy lives on though the nine puppies he fathered. Birdsill said of the ones he’s been able to keep track of, all have become police dogs, “and damn good ones too.”