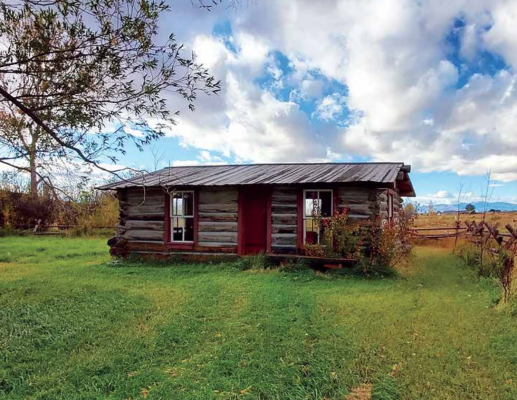 A boost for the Roost

Transport yourself back to the days of the gold rush – of stagecoaches and miners, of hundreds upon hundreds of people making the trek from Bannack to Virginia City, Salt Lake and beyond. If you were on that wild west adventure, there was a good chance you stopped at what’s now known as Robber’s Roost – a two-story stage inn dating to 1863 that has Montana history practically oozing from its walls.

The Roost, now owned by the Virginia City Preservation Alliance, is located between Laurin and Sheridan.

The VCPA has so far dedicated its resources at the historical site by focusing on the exterior of the building. Now, they’re looking to see what can be done about the interior of the roadhouse. That effort just received a major boost thanks to a $4,500 feasibility study grant provided by the Montana History Foundation. The VCPA board chose ARCHitecture trio, Inc. to perform the feasibility study. The contextual design firm originated in Indianapolis and now has its office in Bozeman.

VCPA board Vice President Gary Forney said the Roost, even at the time it was built and occupied, was unique architecturally: significantly different and more impressive than stage stations of the era. An internet search of the property brings up stories of crime and characters of ill-repute, but those tales may be just historical fancy.

“There are a lot more rumors than fact, in terms of its history,” said Forney, “But it was a significant gathering place, not only for the people going back and forth via stages, but just as much for the community.”

The building was unique in that it catered not just to the casual traveler but also to residents of the Ruby Valley. One side of the lower level contained a saloon and tables for gambling. The other half of the lower level had a separate entrance that accessed a dining area and a couple small bedrooms reserved for higher-status lodgers and ladies. Upstairs was a wide open dance hall, which doubled as sleeping space for the men who cozied up on a bedroll right on the planks of the wooden floor.

Robber’s Roost wasn’t actually known as such until the 1930s, around the time it was ultimately shut down by federal agents due to prohibition violation. It was then sold to the Elks Club in Virginia City. The Inn was originally called Daly’s Inn, in reference to its builder and owner, Pete Daly. The Elks assisted Madison County in purchasing the property, and the county eventually sold it to the VCPA in 1999 for $1.

Traveling back even further in time, the site of the Roost was the location of Bill Fairweather’s camp spot during a resupply trip following he and his small party’s discovery of gold in Alder Gulch. Fairweather was accompanied by somewhere between 300 to 500 other men during that return trip from Bannack. Daly realized the value of the property, and the inn came soon after, situated along the route between Bannack and Virginia City as well as the supply chain to the south in Utah.

In a case of ultimate irony, Fairweather’s story would come to its full-circle end at this very site. The infamous gold discoverer died at Daly’s Inn in 1875 at the age of 39, a penniless alcoholic.

The property is also home to a cabin Frank Bird Linderman, who came to the Montana Territory in 1885 at the age of 16, working as a miner, trapper, guide and assayer. He went on to become a major player in Montana history with a list of merits including serving two terms on the Montana legislature as Madison County’s representative, living with the Salish and Blackfeet tribes and supporting the establishment of the Rocky Boy Indian Reservation as well as penning numerous books on Native American tribal stories; he was also a sculptor and owned the newspaper the Sheridan Chinook. Forney said the cabin is restored and in excellent shape.

The upcoming feasibility study will guide the VCPA in their efforts to restore the interior of the Roost. The public will also have an opportunity to share its visions for the property. Forney said the VCPA has done a great deal of work restoring the inn’s exterior, resulting in weather-tight conditions inside. If it’s feasible, eventually visitors will once again be able to come inside after many years of vacancy.

“This is a nice shot in the arm,” said Forney of the grant, and the information and public input that will stem from it. “We’ve done a lot of work in maintaining the property and the exterior and feel like we’ve got that in pretty good shape. So, we are ready to take the next steps, and we want to be smart about what that will be. That era of Montana history is, I think, pretty significant and it’s great to keep the stories alive, in terms of what they went through and what they did to help build the area.”

The VCPA will be choosing an architectural firm that specializes in historical preservation to do the restoration work.

Robber’s Roost and Linderman’s Cabin are located between Laurin and Sheridan. The public is welcome to drop by and take a gander at these historical buildings. An old schoolhouse is also located nearby, but not on public property, so look from afar.

This year marks a decade of grants given by the MHF. In addition to the Roost and cabin grant the foundation doled out funding for 20 other Montana projects, including $10,000 for exterior building restoration for the Buses of Yellowstone Preservation Trust, $10,000 for masonry repair of the Gardiner Community Center, and $7,500 for textile preservation at the World Museum of Mining in Butte.