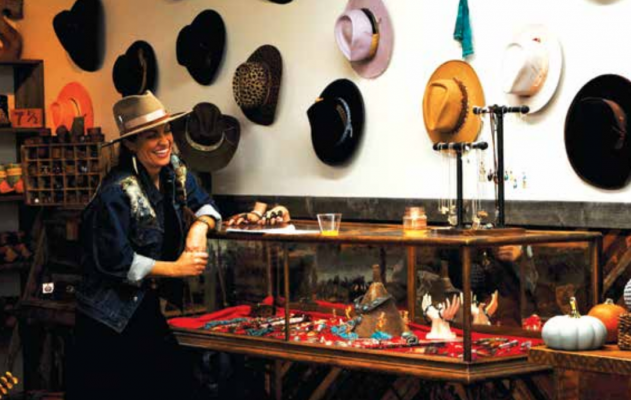 Wed, 10/28/2020 - 7:27am
By
Keely Larson
connect@madisoniannews.com
We are really, really proud of Canty Boots and what we’ve been able to accomplish out here in Harrison. We started with an idea and we built a brand,” Edmundson said.

Off Highway 287 entering Harrison, Mont. sits Canty Boots. From the inside looking out, one can see golden grass, dark blue mountains dusted white and a sapphire blue fall sky. The walls inside are lined with ankle boots of more colors than the outside scenery.

Nikki Edmundson, owner of Canty Boots, admitted the adjective did not roll off her tongue when her husband first suggested it, but when she looked it up, she was sold. A British word first used in 1719 according to Merriam Webster, canty is synonymous to cheerful or sprightly, sunny or upbeat. Not only does Canty Boots’ interior and boot designs fit this description, but Edmundson seems about as canty as they come.

Edmundson and her family, various politicians and representatives, individuals from the Small Business Association (SBA) Montana office, local Headwaters Resource, Conservation & Development (RC&D) employees and Edmundson’s team gathered on Oct. 21 to celebrate. Mimosas, screwdrivers, donuts and fruit along with glowing comments from those congregated congratulated Edmundson on receiving the 2020 Women-Owned Small Business of the Year award for Montana.

“Through that period of time, we got to know Nikki. We got to see how she operated her businesses, how involved she was in her community, what she did with her employees, what was really important to her and the things she valued in her small business. Of course, we got to know through those interactions how important her family is to her and how important her community is to her,” Jaksha said. Last year, Headwaters nominated Edmundson as the entrepreneur of the year.

Canty Boots has a two-part business model: retail boots are ready to wear and range from $360-$880. Those price points cause some eyes to widen, and Edmundson understands, which is where the custom-made option comes in.

People can drop off old boots to be redesigned into Canty boots starting at $150. The tops of the old pair are cut off and sewn back on and finished with signature Canty leather straps and braids.

Using the custom-made framework, Canty’s legacy boots are made to create goosebumps. Edmundson has created boots for women getting married who want their dad or granddad’s boot tops to be a part of their wedding boots, and has shed a few tears in the process. Boots not only get covered with mud and manure, but they carry entire years of someone’s life. “Those legacy boots are kind of my heart,” Edmundson said.

“Nominating her for this (2020 award) was really easy,” Jaksha said—easy because Jaksha and Loeffler believed in Edmundson and found value in her ability to ask for help when needed. Brent Donnelly, district director for the Montana District SBA office out of Helena, explained the nomination process.

“What it means to be nominated is somebody thought so much of what you’ve done in your business, with your family, with your community, with others surrounding your life, they’re willing to put forward the time and effort to fill out a great big nomination form,” Donnelly said, which includes narrative answers to questions, letters and phone calls.

Representatives from the offices of Sen. Steve Daines and Congressman Greg Gianforte and a letter from Sen. Jon Tester commended Edmundson for growing and continuing her small business during uncertain times. Madison County Commissioner Ron Nye and the executive director of Headwaters, Joe Willauer, expressed similar sentiments. All emphasized how important small businesses are to Montana’s economy.

Willauer spoke about how he first heard of Canty Boots before Edmundson started working with SBDC—his wife was ‘blowing up his Instagram’ with pictures of the boots. Edmundson has used social media to grow her reach to Vegas, Vail and Australia. “To see that impact at the local level for someone that’s just over the hill from us is incredibly cool,” Willauer, mayor of Twin Bridges, said.

“We are really, really proud of Canty Boots and what we’ve been able to accomplish out here in Harrison. We started with an idea and we built a brand,” Edmundson said after receiving the award from Donnelly.

She went on to introduce each of the four women on her team and expressed her love and gratitude for each. Tess Williams, hired just a day before the celebration, works on boot patterns and braiding leather in the back. Williams lives in Pony and provides live music every other weekend at the Pony Bar.

“Being a musician, it’s a very similar thing. It’s so much about you. It’s an art,” Williams said of the similarities between singing and boot design. Both are artforms that need a community’s support.

“The only thing that I can really think of that really would make us better is an espresso machine,” Edmundson said to laughter from the crowd. Her husband tells her to stick to boots, “but imagine what we could do with vanilla lattes!”

The small business spirt is alive and well in Edmundson.