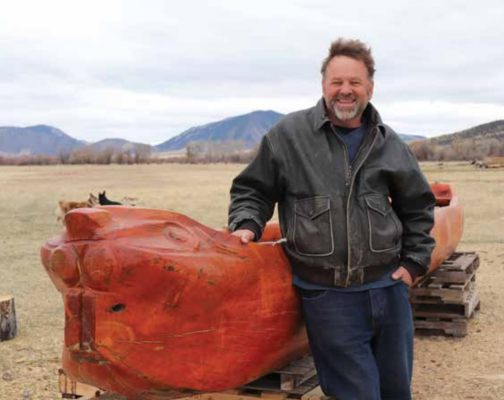 Back to the basics: A photo essay

Wilderness survival students prepare for six weeks on the Yellowstone

It may have been a cold and blustery spring day in Cardwell, but the students at Green University were seemingly unaffected by the persistent April chills. The class of eight was busy going about their studies and day to day activities – washing and scraping hides, making buckskin clothing, building shelters, and having lunch in the school’s woodsmoke-infused yurt kitchen.

Madisonian readers may be familiar with Green University founder Thomas J. Elpel. The outdoor enthusiast kept us in the loop in 2019 as he traveled for five months along the Missouri River, sending regular updates that were published in the paper. His book, Five Months on the Missouri River Paddling a Dugout Canoe, has garnered three awards including the one Elpel’s most excited about, the Writer’s Digest First Place Award for Non-Fiction.

With that lengthy adventure under his belt, Elpel is now looking forward to taking another dugout down the Yellowstone River this July, August and September. His students will accompany him on that adventure outfitted with stone age garb and gear. But before they’re ready for the ultimate culmination of their lessons which began in September, they’ve got some time to hone in their primitive wilderness survival skills.

The students live on property, residing at River Camp in unique accommodations including yurts, Earth shelters, wickiups. They eat lots of wild game, which is often donated to them by hunters or even via roadkill that’s still fit for consumption. Over the course of a year at the school they learn about bow hunting, basket weaving and other primitive survival skills.

For more information on the university, as well as other classes offered by Elpel, visit http://www.greenuniversity.com/.