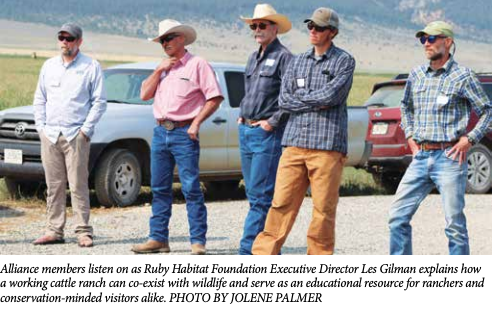 On August 25, amidst the fields of Woodson Ranch and with the mountains of the Ruby Valley as his backdrop, Ruby Habitat Foundation Executive Director Les Gilman addressed a small crowd of listeners with varied backgrounds but at least one thing in common: their respect and admiration for the Ruby Valley.

The afternoon gathering at the RHF’S Woodson Ranch was part of the Ruby Valley Strategic Alliance’s summer field tour which brought its members and supporters to not only the picturesque Woodson Ranch outside of Laurin, but also to the Ruby Valley Conservation District’s carcass composting site, a locale which several attendees commended for its lack of smell or scavengers.

Following the compost site tour attendees headed to Woodson Ranch to take in the sights often found there – blue herons greeting guests near the entrance; families of white-tailed deer with spotted fawns bounding through grassy fields along the Ruby River; a flock of wild turkeys crossing the gravel roadway; a pond filled with waterfowl and blackbirds.

Upon arrival to the orchard site alliance members and guests circled round Gilman who provided historical context for the ranch, once owned by Craig Woodson, a retired Texas newspaper publisher who set out to change the land in the early 90s, only to find the land had changed him along the way. He had planned to sell the ranch after 10 years of ownership. When that time came, however, Woodson realized he couldn’t do it, opting to create a foundation which would protect the property in perpetuity as a place where agriculture and wildlife can co-exist.

Now the lands are in the hands of the RHF who continues to manage the property as a working cattle ranch – but one which also welcomes guests to fish its river and streams, hike, birdwatch and hunt deer in the fall.

One of the ranch’s most recent projects coming to fruition is the Heritage Apple Orchard – which kicked off several years ago. Gilman and Woodson Ranch Outreach Coordinator Dave Delisi passed around puns related to the challenging project in which they learned perhaps more than they’d ever cared to about grafting, apple cultivation and tree care. Apparently, there are about 7,000 varieties of apples in the world, and then a 200-page book dedicated to things that can go wrong with them, from soil pH to insect life, the health of neighboring orchards, can affect what happens at the ranch’s orchard.

“So I’ve come to the conclusion that every apple is a miracle,” said Delisi. “It really is a remarkable thing, if you get an unblemished apple, and you think about how long ago that original apple tree was grown that then became grafts, and then eventually got sold to your neighborhood grocer, it’s a remarkable thing.”

Delisi recounted struggles with the young orchard, including a 50% grafting success rate and a possible run-in with Roundup – usually a death sentence for a plant. Two months ago, Delisi texted Gilman in a combination of panic and tears, fearing for the wilting trees. “But there are just so many life lessons you can get out of an apple orchard,” he said. “And one lesson is that life dies hard, and those apple trees are resilient.”

Once the project is fully up and running the Woodson Ranch crew hopes to share their experiences with entrepreneurs in the valley looking to start a new agricultural commercial enterprise.

Alliance member Chris Edgington of Montana Trout Unlimited attended the tour, highlighting the alliance’s ability to bring folks with diverse interests and backgrounds together to find commonsense solutions in the valley – working together to keep ag productive and profitable is one aspect of that collaboration.

Edgington said ag producers are a number one partner for MTU, “In general they’re good stewards of the land, they care about the resource in similar ways as we do,” he explained. “We’re just looking for common ground solutions that benefit everybody.”

One agriculture-Trout Unlimited collab relates to irrigation efficiency issues, if MTU can help an irrigator get their water, while also keeping more water in the river, “It’s a win-win for everyone,” sad Edgington, continuing with other topics he’s taken part in, such as predation, while it may not be in his wheelhouse, “It’s all a part of understanding the bigger picture. It’s about taking a holistic view of an area like the Ruby Valley, which is very unique in Montana, in my opinion. This is a close-knit community and people do really still work together here and look out for their neighbor.”

One way to look at the multi-faceted collaboration, said Edgington, is the 80-20 rule: 80% of it is bringing ideas and common ground to the table, while 20% of things are just never going to be agreed upon. “So we don’t discuss those things, everybody’s time is valuable, so we discuss where we can find solutions.”

Following the orchard tour Twin Bridges rancher and founding member of the alliance Rick Sandru offered some historical context for the group that’s technically been meeting since 2015.

It was a result of relationships that were built during the time of Senator Tester’s Forest Jobs and Recreation Act which attempted to designate 92,000 acres of wilderness in the Snowcrest mountains. That would have encompassed half of Sandru and several other ranchers’ Forest Service grazing allotment.

“We felt threatened by that,” said Sandru of the Jobs and Recreation Act, “So we ended up going to a lot of hearings and meetings, and there’d be a line of us waiting to testify, and then the people on the other side of the issue were waiting in more lines. I got to visiting with them, and we began liking one another. Conversations grew, and long story short, we figured out we had a lot more in common than not.”

The newly amenable parties decided to meet some more, eventually creating the Snowcrest Agreement, changing proposed wilderness boundaries and adding language that protected the right of the grazers to continue doing so. With that, the wilderness advocates felt the integrity of the land was maintained.

“It was kind of a historic agreement,” said Sandru, noting that the agreement was ultimately defeated. “But out of that came a mutual respect and new friendships that we’d never had before. It created these very unusual alliances and very good relationships with unlikely partners.”

Not wanting to waste the alliance created via the Snowcrest Agreement, Sandru took “a crazy idea” to the Ruby Valley Conservation District. He expressed his interest in creating a diverse group that could tackle some of the issues facing the Ruby Valley.

It was a tough sell, said Sandru.

In 2016 the Ruby Valley Strategic Alliance was officially formed. There are now 15 official members, but several other interested parties participate.

“We’ve been meeting and tackling issues ever since,” said Sandru.

One ongoing issue of discussion is the grizzly bear and its impacts on livestock. The group is also working on a resource management strategy to create a foundational document which can be referred to so conversations don’t have to start from scratch as new issues, like a new forest use plan, arise.

“It’s turned out to be a very fulfilling and worthwhile endeavor,” said Sandru. “We don’t dwell on the areas we don’t agree, we put recommendations forth where we do agree, so our comments end up being tremendously positive, and constructive.”

The alliance’s input has become so respected that U.S. Senator Steve Daines’ staff has reached out to the alliance for comments on issues. One recent win that the alliance fought for was the ratification of the Confederated Salish and Kootenai Tribes Water Compact which will bring $90 million in federal funds annually over 10 years to rebuild the Flathead Irrigation Project.

“For 30 years they had been negotiating this thing, and it got to congress and stalled out,” said Sandru. “And we made it happen.”