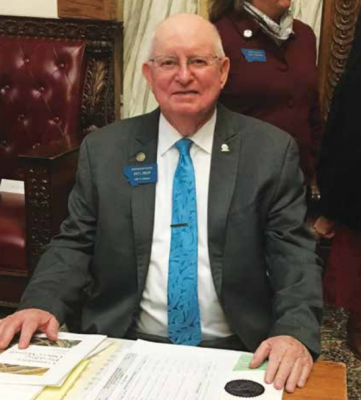 Representative Ray Shaw on his time in the MT House

Walking into the Montana House of Representatives Chamber, one steps through an aisle in the center and looks towards a Charlie Russell painting. Democrat representatives sit on the right, if you are facing the painting, and Republicans on the left.

Representative Ray Shaw described the aisle in between as Montana.

“That’s where Montana works together,” he said. “Both sides of the aisle can come to the middle of that big walkway that goes in between the Republicans and the Democrats.”

In his experience as a representative for Madison County and portions of Jefferson and Silver Bow Counties, Shaw learned that a big part of the job was learning how to make friends. Within those friendships, people did not always agree, but a productive friendship ended with a conversation about who is going to buy lunch later.

Shaw is a fifth generation Sheridan man and grew up in a ranching family, not unlike many of his constituents. “I’ve been fortunate enough to live in the greatest county in the state of Montana and I believe that. There’s nothing in our county that we don’t have, nothing,” Shaw said, referencing agriculture, natural resources, outdoor recreation and world-class fishing rivers.

Before his position in the House, Shaw had been casually involved with politics—voicing his opinion to people in office or people in general. He started to get frustrated, feeling that those in office were not looking out for the people they were elected to serve.

Shaw described the first few months of the job with the familiar adage—like drinking water from a firehose. There was so much going on, so much to pay attention to and so much to learn.

One man who ended up being, as Shaw described, the best friend of his life, took Shaw under his wing early in Shaw’s career. He told Shaw where to sit in the House chamber before seats were even assigned, and Shaw pointed this out. The man, with a handlebar mustache, told Shaw once again to sit where he told him to sit.

That was Shaw’s first, and certainly not last, cue to just listen.

“It takes two years or more before you really kind of get a grasp on what really is going on,” he said. Two years of building relationships, managing those relationships, working across that aisle—a withstanding metaphor— and learning about issues that stick with you your entire career.

Water—rights and availability—was one of those things that stuck for Shaw. The CSKT-Montana Water Compact, recently passed by Congress, involved the Confederated Salish and Kootenai Tribes (CSKT) relinquishing off-reservation water rights and regaining control of the National Bison Range on the Flathead Indian Reservation, as well as receiving funds for the Flathead Indian Irrigation Project. The agreement bypasses what could have been years of litigation and money spent.

The expansion of the state Medicaid program in 2017 was ‘huge,’ according to Shaw. It allocated more money to rural hospitals and gave them more stability. Shaw described it as supporting those who could not easily afford hospital bills, and in turn giving hospitals more patients to keep their doors open.

As a Vietnam veteran, veteran affairs were another big deal to Shaw. In 2017, federal and state money was appropriated for the Southwest Montana Veterans’ Home in Butte, which provided another place for Ruby and Madison Valley veterans to go instead of driving to Bozeman or Helena.

After Vietnam, Shaw attended Montana Tech and studied geology and hydrogeology. “Water is a big deal. We take it for granted and we have to quit taking it for granted,” he said.

Shaw has concerns about water availability for the population growth in the Madison, Ruby and Gallatin Valleys, and also for the farmers and ranchers, who in his view, make up the backbone of the Madison County valleys.

“The resource will only stretch so far,” Shaw said. “You can only poke so many holes in the ground and you’re going to lower that aquifer or take that water level down. They’re going to end up taking water from farmers and ranchers.”

The list of items that were of great importance to Shaw went on, more than can be included in a newspaper article, but goes to show how a willingness to listen and a determination to adequately represent constituents leaves behind a trail of important issues for a representative.

For almost eight years, working across the aisle was necessary for getting things done. Shaw learned this was much more effective than grumbling. “One thing you learn is you’re not going to get everything you want. And so, you’re going to have to compromise a little bit,” he said.

Compromise, and still get lunch afterwards. As a people person and a fan of lunches, the people have been the best part of Shaw’s job.

“There is not one House District in this state that is the same as the other,” he said. His immediate concerns were in House District 71, but if friends in eastern Montana needed help, he never shied away.

“My first priority is Madison County and there’s so much going on there and so much more that needs to be done, and I’m going to help with it,” he said.

Montana politics have certainly not seen the last of Shaw. He plans to continue being involved in those things that became so important to him—water, agriculture, cloud seeding, veteran affairs to name a few. “Why would I step away?” he asked.

“People don’t realize what a pleasure it has been. I don’t represent just one part; I represent everyone in the county. I don’t give a damn if you’re Democrat or Republican or black or white or orange or green or what you are. It was my privilege and duty to represent you."