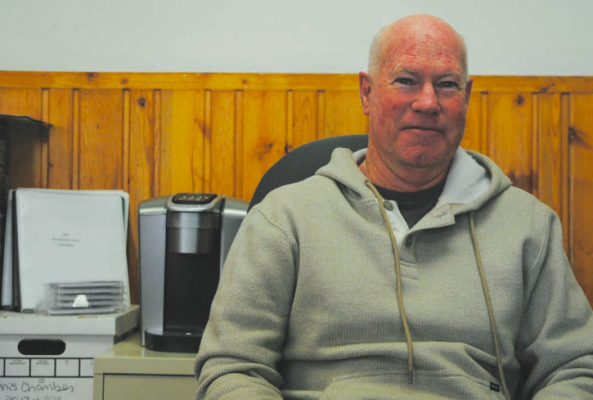 Wed, 04/29/2020 - 9:47am
By
Keely Larson
connect@madisoniannews.com
“I love to put on things where you make other people happy. You work hard to then watch other people have fun, and that’s the best part for me,” Bettendorf said.

Marshall Bettendorf loves coffee. In fact, it was the only beverage offering he had at his office in the Ennis Chamber of Commerce building during our interview before the coronavirus crisis set in. He also really loves being engaged and supporting any and all community events, making him an ideal fit for the Executive Director position with the Chamber.

He may be a new face in town, but he is not a total stranger. Bettendorf and his wife, Alice, visited Ennis seven years ago and attended the Fourth of July parade. “I was pretty impressed to say the least,” he said.

The couple has four daughters between the two of them and they planned on moving into a house they bought in Colorado Springs after the girls left home. A summer spent visiting family around Ennis changed everything.

Late last summer as they were visiting, the Bettendorfs decided to participate in absolutely everything they could. Purchasing raffle tickets, going to events, volunteering to bottle at Willies and enjoying the golf course all made the agenda. The job opening with the Chamber reached their ears and Alice thought Bettendorf would be a good fit.

“One thing led to another and we kind of changed our minds,” he explained with a slight southern tinge to his voice.

Bettendorf ’s background is in fundraising and event management. He is used to being on the periphery of events, making sure everything in the middle goes according to plan. “I love to put on things where you make other people happy. You work hard to then watch other people have fun, and that’s the best part for me,” he said.

Since moving to Ennis, Bettendorf ’s focus has been understanding his role in the Chamber and the Chamber’s role in Ennis. Before social distancing restrictions, he walked a two-mile loop downtown to talk to neighboring businesses and make connections with community members.

“Just tweaking and improving on the things that Ennis already does very well is the Chamber’s responsibility, and then not only getting out information to the membership, but just the community at large about what we have available in town,” he said.

As the coronavirus changed business operations, Bettendorf saw a difference in the type of information he circulated. “I do think the role has changed temporarily in that I paid more attention to sending out information that wasn’t necessarily town, but more country,” he explained. “I tried not to post until I verified my sources.”

The Chamber is just one cog in the community machine, he explained. He views its job as promoting Ennis to surrounding areas, and welcoming visitors to events with the goal of doing the same the next year.

As Phase One of Gov. Steve Bullock’s reopening plan begins, Bettendorf moves ahead with planning for the Fourth of July Parade until he is told otherwise. “From an event standpoint, you can’t wait until the eleventh hour to start planning,” he said. Ultimately the board, town, commissioners and governor will make the final decisions.

While working for a university back home in South Carolina, Bettendorf oversaw an internship program with great results. One of his interns ended up working for the United States Olympic Committee.

He began a similar program for Ennis high school students to gain portfolio additions and job experience. The positions offered cover social media for the Chamber, extra help with events and office tasks.

Three interns were chosen. Ellawynn Morrison works with event planning, currently focused on mapping out the Fly-Fishing Festival scheduled in September. Madison Allen is the media intern, posting on social media and creating ads. Kennedy Davis is the in-office intern, in charge of updating the website and working on a t-shirt design contest.

“The help is great. I’m more interested in them taking away some concrete experience,” Bettendorf said.

Ultimately, Bettendorf came to Ennis for the beauty and stayed for the people.

He watched Ennis rise to the coronavirus challenge with a renewed sense of admiration. “The one thing I’ve learned, and I just kind of happened into it, the individual personal giving without the expectation of return in this town is fantastic. That people are willing to buy something just for the sake of it, just to help somebody out,” he said.

The summer before the couple moved, Bettendorf happened upon high school basketball and volleyball teams putting on a car wash. His car was dirty, and he liked fundraisers, so he figured he would stop and let the teenagers clean his car. “I went to pay somebody, and they were like no we’re just doing this as a community give back, and I was blown away by that. I played sports and I never did anything like that,” Bettendorf remembered.