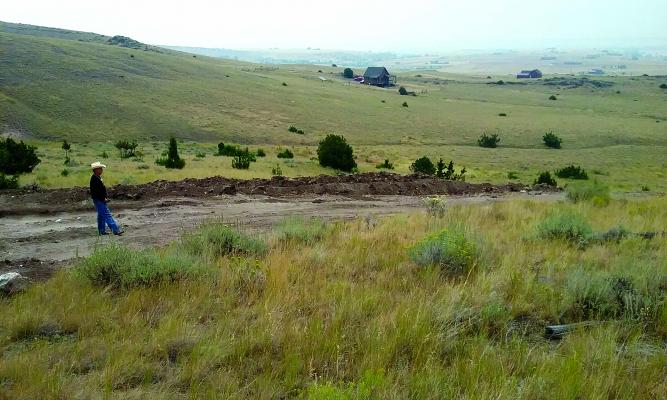 ENNIS—When Lorraine and Chuck Ravis were evacuated from their home on August 12, they signed next-of-kin paperwork, uncertain whether they’d see their home again.

“They had us sign our lives away, almost literally,” says Chuck. “We saw fire equipment going up Haypress Lakes Road, and obviously we knew something was going on with the smoke just pouring out of the valley.”

They’d been watching the smoke since that morning, and around 10 a.m. saw three large planes start flying over, alarmingly low, en route to the Monument and Wigwam fires.

The Ravises live less than a quarter mile up Haypress Lakes Road and were barely within the mandatory evacuation area set up by the Forest Service. The pair hail from Maine but built their summer home themselves around a decade ago and have been spending summers in Ennis ever since.

As the day of August 12 went on, they watched as bulldozers began cutting across Bar 7 Ranch, with whom their property shares a border. The dozers were cutting a fire line in preparation for the fire’s expansion, and suddenly the danger became real.

“That’s when we figured ‘maybe this is kind of serious,’” remembers Chuck. “So, we made a couple truckloads to friends down in Ennis.”

The Ravises stayed with friends in the valley that night, and the next day made the decision to go up and check on their property. Even though they live just inside the border of the evacuation zone, that was when the next-of-kin forms came out.

They made the decision to stay in their home that night, encouraged by changes in wind and the knowledge of how many crew members were working on the fires. The evacuation would remain in effect until August 20, but the Ravises only spent one night out of their home.

It’s not the first time the pair have been within striking distance of a forest fire, but it was their first mandatory evacuation.

“We helped a neighbor who lived really close to a fire line move a bunch of stuff out of their house around 2012,” remembers Lorraine. “You could stand on their porch and look up and see the flames.”

The Wigwam Fire was never visible from their home, she says, but the smoke and the ominous orange glow certainly was.

“We were probably a mile and three-quarters from that fire, and this year I don’t think it was closer than three and a half at its nearest,” says Chuck.

“This one was obviously a bigger fire with the potential to come right down the canyon, so it was a little different this time. There was a sheriff every time you came in and out of the gate.”

The Ravises were one of eight families that were evacuated as a result of the Wigwam and Monument blazes. Of far more concern for them was the well-being of their uphill neighbors in the Haypress Lakes subdivision.

“For the houses three or four miles up, things were a lot more serious,” says Lorraine. “It can take 30 or 35 minutes to get down from there.” On unpaved roads with treacherous grades, it would have been difficult to get out quickly if an urgent need arose.

Once back in their home, the Ravises continued to watch as another fire line went up bordering their property. They delayed a trip they had planned for the weekend, but for the pair, forest fire season is becoming a norm.

“People would reference it when we moved, but we never really saw smoke for the first couple years we were here,” says Chuck. “It’s becoming more and more prevalent. The last few years have demonstrated it’s just a fact of life in the west.”

But even with that fact of life, the Ravises love Montana too much to let fires scare them off. They have mowed their grass back and moved their wood pile, done “everything you’re supposed to do,” says Lorraine.

If the house they built with their own hands burns down, it would be tragic for them.

But they’re in it for the long haul. It’s a risk they’re willing to take.

“You just hope it doesn’t happen again,” says Lorraine. “What can you do? When people in Maine find out we leave for the summer, they think we’re crazy.

“But I just tell them, ‘you’ve never seen Montana.’”

ENNIS – According to the final daily update of the Southern California Interagency Incident Management Team 3 (SCIIMT), submitted on Monday, August 27, the both the Monument and Wigwam fires are being contained.

The Monument Fire is 32 percent contained, having burned 6,614 acres. Three crews, seven engines and more than 200 fire personnel are still battling the fire.

The Wigwam Fire is 98 percent contained, having burned 4,087 acres. Two crews, four engines, a bulldozer and 79 personnel are still battling the blaze.

Three helicopters have been utilized for both fires, and SCIIMT is happy to report that there were no injuries or structures damaged or destroyed in this fire.

This update would be the last published by SCIIMT.

SCIIMT wanted to thank the town of Ennis and the surrounding communities for its hospitality, support and understanding. “We will all remember the Madison Valley and Gravelly Mountains and the people who make them special,” said SCIIMT’s report on the fires.

A local Type 3 team transitioned with the SCIIMT team Sunday and assume management of the fires on Monday August 27, at 7 a.m.

Fire resources are being reassigned or going home. There will be an adequate number of fire resources continuing to work with the incoming Type 3 Team.

The Incident Command post with tents and support facilities, was removed from the Ennis fairgrounds on Sunday.

At the peak of firefighting, Aug. 22, 335 firefighters were employed to battle the blazes.

In their own time, the Eureka and Blue Lake Fires received as much attention as the Wigwam and Monument. In their own time these two fires were large for the area, and received as much attention as the two that continue to burn today in the Gravelly Range. It is noteworthy, however, that when considered together the Monument and Wigwam fires have consumed over 10,000 acres of forest in the Beaverhead-Deerlodge National Forest and cover an area that dwarfs any other recent fire on the map.

The Wigwam and the Monument Fire are both in a condition that can be managed with a smaller organization. Fire personnel will continue to be present on the fires patrolling their perimeters, mopping up, and repairing firelines to prevent erosion.

Stage 1 fire restrictions in effect on the Beaverhead-Deerlodge National Forest apply to campfires and smoking. See full restrictions at https://www.fs.usda.gov/alerts/bdnf/alerts-notices/?aid=48488

A Temporary Flight Restriction (TFR) remains in effect over the Monument and Wigwam Fires.

Area Closures: closures by multiple agencies including United States Forest Service are in effect for the Gravelly Range Mountains. Posted on Inciweb: https://inciweb.nwcg.gov.