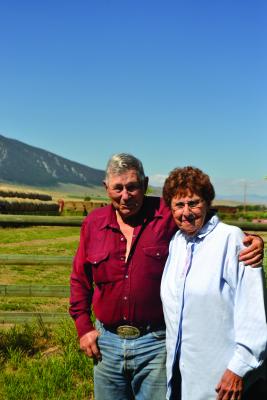 Rosdahls look back on nearly eight decades of Montana life

SHERIDAN—“I have some stories of things that have taken place. Some are worth writing about.”

That’s how Arnie Rosdahl begins the manuscript that will someday turn into his autobiography.

Rosdahl and his wife, Mary, both 82, live in Sheridan. They’ve spent nearly all their lives in southwestern Montana and there isn’t much they haven’t seen or done.

At first, they didn’t find their story particularly unique, but with the encouragement of some friends they began to chronicle some of their stories and realized they had too many to count.

The Rosdahls are both Montana natives: Mary born in Laurin and a graduate of Virginia City High School and Arnie from Glen, a near-graduate of Dillon High School. He quit during his junior year in favor of a career in the Navy and the National Guard. He joined both at the age of 17.

“I went to the far East; I spent all my time in the Pacific Ocean,” remembers Arnie. “But I would never have wanted to live in any of those places, even Hawai’i.” After his honorable discharge, he returned to Montana.

“The first day we met, we knew we were going to get married,” says Mary. “We just didn’t know when.”

“I asked her for a dance, and it was like I’d danced with her forever,” says Arnie of that Fourth of July.

After they were married, the Rosdahls spent 14 years living in Sheridan. After that they moved to Combs Cattle Company between Ennis and Cameron, where they managed the cattle ranch for 19 years.

Both cherished memories of growing up on ranches, and they raised their five children in much the same way they’d been raised themselves.

“We’ve lived in the country pretty much all our lives; we all learned how to work,” says Arnie. “In all ways, it was a family operation.”

Often, Arnie would thresh hay, Mary would bale it and one of their sons would stack it. Their daughters all became excellent cooks and loved taking care of the ranch’s calves.

The country life stuck: all five of the Rosdahls’ children still live in Montana, along with many of their 12 grandchildren, six step-grandchildren and ten great-grandchildren.

Another event featured in Arnie’s memoir is the infamous gorge of the Madison River near Ennis, something that happens in very few places on Earth.

When the temperature of the river changes abruptly on the surface but remains warmer down below, an enormous ice dam emerges as the river below freezes, often spreading over the banks and high above the river’s usual surface level.

The Rosdahls have watched the Madison gorge five times over the course of their lives.

The first came in the winter of 1978, when Arnie and his son had to rescue some of their cattle from a pasture near the river. But the trailer’s end gate got left behind, so when the cattle got loaded, they tied bales of hay together and used them as a replacement to keep the cattle where they were supposed to be.

“You’d hear a sound like a shotgun going off, and see the ice pushing fence posts up out of the ground,” remembers Arnie. “I’ve had high blood pressure ever since then. Even after the river opened up, pieces of the ice were there until May that year.”

The Rosdahls later moved to Bar 7 Ranch, where they acted as ranch manager and bookkeeper for another 19 years before retiring in 2010 when both were 73. But they both regret the decision to leave.

“We shouldn’t have retired,” says Mary. They both miss the work they did and the people they did it with.

“I feel like one of the luckiest guys, to have had two families on those ranches that treated you like family, not like hired workers,” says Arnie. “Back then, a man was as good as his word, and a handshake was better than any document you could sign.

“It ain’t that way anymore,” he says.

Just a few weeks ago, the Rosdahls celebrated their 60th wedding anniversary at the El Western convention center in Ennis. The attendance was a testament to the impact the pair has had on their communities: over 120 people came to celebrate their life together.

“What a bash!” says Arnie. “But you can’t visit with everybody when you have that many people. That’s the worst part of it.”

The visiting is one of their favorite parts. Mary and Arnie are practiced storytellers, and they tell each tale as a unit, sharing sentences and dialogue as if they’d practiced it. As they reminisce, Arnie looks at his wife across the table, and she looks back.

I don’t remember much about my real early years. I think I started school at Colstrip, Montana then remember school in Butte and Anaconda, Montana. (My folks divorced sometime before the last schools.) I believe it was 1946 that my mom and Myrna, Sherry, and I moved to the Joy Ranch at Glenn, Montana. My mom was the cook there.

It wasn’t long before I was doing a lot of chores; started out feeding the pigs and worked up to milking the cows also, of course getting the wood in for Mom and also starting the fire in the cook stove and other stoves on the cold days.

I started helping hay at that time. I started mowing with a team by cutting down thistle patches.

I drove the cows to summer pasture at that age by myself. “187 head with calves and I think some bulls (can’t remember how many). I’m sure the cows were mostly bred up by that time.” I guess this is when I got interested in cattle and how they were managed. I’ve always liked good horses and cattle the best.

I think we got our first rubber tired tractor in 1951, an 8V Ford, and I think Lee sold the ranch early 1952. I was a freshman in high school. “I went through the 8th grade at Glen School, a one room school with all 8 grades.”

In the summer of ’52 I went to work up in the upper Ruby Valley for Peter Anderson, on Ledford and Robb and Rock Creeks, irrigating and haying. I went back to Dillon to school in September and then back up there the next summer. The summer of ’54 I joined the Navy in July 5 days before I turned 18 years old and served my time on the Pacific. I went to the Far East and China and Japan. Also I traveled through the Bering Strait and by Point Barrow when they put the Dew Line Rader system in. I joined the National Guard in ’53 at 17 years old.

I moved the family to the Madison in ’72. We took over taking care of the Combs cattle ranch. We were 3 ½ miles off the highway up by Cameron. It was a good place to raise kids and a great family to work for. We were there 19 years. Punch and I took care of most of the riding, but the girls did a lot of chores. Mary did a lot too. She baled all the hay during haying plus some of the farming. We all worked hard during calving. The company bought some land on the river, “Madison River,” and we did most of our calving there till we got run off by the gorge. There was one week of North wind that the cows started bleeding from the nose some and I thought we were going to lose some of them. I had to plow snow off the road every day, between where we had the cows and home. We had a cattle drive every year to the BLM pasture above the Axolotl Lakes and some of the guests from the dude ranch would go with us. They always enjoyed the drive.

The Bar 7 Ranch called up one day and needed a manager and cow boss over there. Well, we were going to go back to the Ruby when Combs sold as we had some ground we were paying for. But Pete Combs came up and wanted us to go over to the Bar 7 Ranch and talk to them. So we went and talked with the owner and after some talk, I said, “Well, what you see is what you get. Mary and I come as a package.” So they said they would put her in as book keeper which was great. So we took it September ’91.

We were there on the Bar 7 Ranch for 18 years 9 months. We retired on January 1st, 2010. We were 73 years old and should have stayed there as “retirement isn’t what it’s cracked up to be.” But we have a few cows here in the Ruby and irrigation and put up hay, but I get bored a lot. I miss working a large bunch of cattle and having lots of things to do.

A buddy and I went hunting up Green Horn Creek on the upper Ruby where we camped out. The next day we headed out looking for elk. I came up on a couple of cubs. They were playing, and I said to my buddy, “Do you want to see these bears?” He said sure so I said I’ll woof at them and they should stand up and you’ll be able to see them. Well, I woofed at them and instead of standing up, they started squalling and down the mountain came mother bear!! My brain said run, but my feet wouldn’t move so I put my scope on her as she stood up and thought I don’t want to kill you, but I will if I have to. She took some steps and then turned right around again. I was still standing right there. I didn’t move at all. She turned away again and took her 2 cubs and left. All the way back he lectured me on how to leave them bears alone.

I took a job at the Gilbert Livestock above Alder. Mary and I and 2 kids moved into a dirt roof cabin off Corral Creek. I always said she was the last woman to live in a dirt roof cabin!! She enjoyed living there, and it was a real rewarding experience. I would leave early with a pack string and come home late sometimes. She and the kids would be by the screen door with the lantern going when I showed up.

Well, one morning I was going to take the power wagon over to another camp on Clover Creek by Blacktail. I got just about to the cabin where Mary and they were, she said, “Your pickup!” I looked around and there it was rolling down the road! I was pretty fast afoot in those days so I figured I would catch up to it and climb in the box and go to the front, step out on the running board and get in and stop the pickup. I could just touch the end gate with my fingertips. Well, off the road went the pickup and down through a patch of little quakies laying them down. Into the creek and at the bottom the pickup went right between 2 big trees. I walked down there, and it was still running. Got in and put it in 4 wheel and backed it out of the creek.