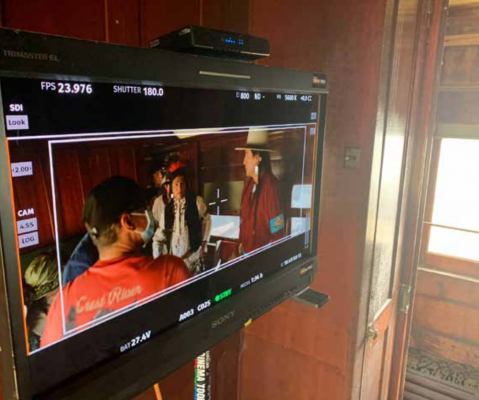 It began with lost history and a mysterious document in the National Archives. This led to a powerpoint presentation created by historian Orlan Svingen. He never foresaw that he would become an executive producer of a film, but he wanted to find the best way to share a story – an important story.

What he shared with that PowerPoint presentation became part of the oral tradition of some Shoshone people. A documentary was later created. Producer and director of photography Steve Saxon and producer, director, and script writer Cesar Rodriguez saw the importance of the story. Then, all the puzzle pieces fell into place for a film short recently shot in Virginia City and in other locations throughout Montana. Chief Tendoy should be a household name – that is what the people behind the film believe.

Bozeman-based actor Michael Spears who is of Lakota Sioux Tribe went and secured approval from the Shoshone Tribal Council before accepting his role – to portray so notable a character as Chief Tendoy required the approval of the Shoshone people.

The entire cast and crew smudged – a ceremonial practice of using smoke from the burning of a sacred herb like sage for purification. The actor who played President Ulysses S. Grant went back for a second round, an act that Svingen found endearing.

The Shoshone tribe – Sacajawea’s people, led by Chief Tendoy, sought a peaceful resolution with the United States Government. When other tribes were raising weapons, Chief Tendoy raised his voice. The tribe gave up thousands of acres of prime land in order to be relocated to the Salmon, Idaho area. The problem is that the cession document was never ratified and the full extent of what transpired was not realized until the mysterious document was discovered by a graduate under Svingen’s tutelage, who found it in the National Archives.

Svingen explained that the normal process is for a treaty to be ratified by the U.S. Senate. This treaty sat in an inbox, so to speak, in Washington, D.C. after Congress established that the government would no longer negotiate treaties with Indian Tribes. Chief Tendoy had no idea what was happening. When President Grant realized the Shoshone still did not have a reservation, he created an Executive Order Reservation – though it proved an impermanent and flawed solution. Executive Order Reservations can be rescinded, which this one was in 1905.

Two decades after being settled just south of Salmon, Idaho, they were booted off and ordered to relocate – another trail of tears and another dark mark in the sordid history of the westward expansion in the Colonization of America.

“It’s a wretched, wretched story,” he said. “I’ve always said this is one Hell of a way to thank Sacajawea and her people after the crucial role they played [for Lewis and Clark] to provide horses to get across the mountains to the Nez Perce.”

The documentary can be watched for free at https://vimeo.com/osvingen/ingoodfaith The film, “Chief Tendoy” will hit film festivals when it is completed.

More about the history of Chief Tendoy can be found in the Winter Loop Magazine.