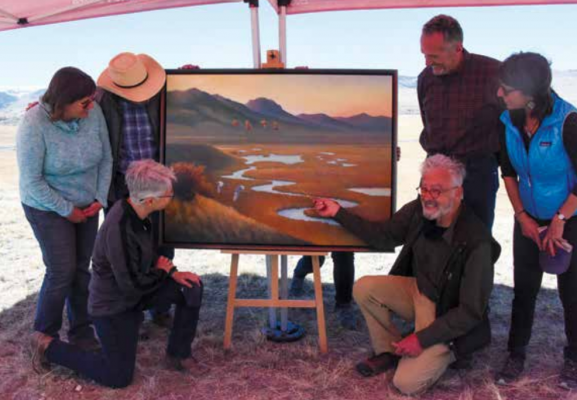 Proceeds of print sales donated to Madison Food to Fork

The outstanding success of the Ennis-area O’Dell Creek Restoration Project, which began two decades ago, is recognized with a NorthWestern Energy-commissioned painting by renowned Montana artist Monte Dolack.

The original artwork “Restoring Our Waters” is on display at the Ennis Chamber of Commerce. All proceeds from the sale of prints of the work will be donated to Madison Farm to Fork, which in partnership with the Madison Conservation District and the Ennis School District, created the Gardens, Resources, Outdoors, Wildlife and Watershed (GROWW) program for youth.

The O’Dell Creek Project began in the early 2000s to repair damage that began in the 1950s when the area was ditched to expand usable land for agriculture. In doing so, a unique wetland was partially drained and damaged.

Since then, more than 14 miles of creek channel has been restored and 815 acres of wetlands created, resulting in improvements to an important tributary to the Madison River. The results have included fishery improvements and a re-establishment of wetland obligate species.

“We all want to see an environmental win, which is what we have with this project,” said NorthWestern Energy Director of Environmental & Lands Permitting & Compliance Mary Gail Sullivan. “When the hydroelectric dams were relicensed with the Federal Energy Regulatory Commission for the privilege of generating electricity on Montana rivers, there was an obligation to fund environmental and recreational projects.”

That funding, along with the need at O’Dell Creek and most importantly, willing partners in the landowners, were the ingredients for a successful project, Sullivan said.

“This has been a great journey and a great example of what cooperation can accomplish when all are working toward a common goal,” said Jeff Laszlo, the fourth-generation owner and managing partner of the Granger Ranches, one of two landowner partners in the project. “We are a working ranch producing cattle and crops, we continue to learn and work to improve operations in a synergistic way that serves both conservation and production agriculture.”

“This is how it should be,” Dolack said. “We can all work together. I was delighted to be able to bring whatever I can to this project, so there’s at least a visual that ideally would sum up what we’re trying to do.”

“This makes me emotional, this is exactly what conservation work can be, should be,” Suzuki said.

“The heart of our electric generation in Montana is our hydro system that is an environmental, recreational and cultural asset for the state and indeed for the nation,” said NorthWestern Energy Chief Executive Officer Bob Rowe. “Our Montana electric generation portfolio is 69% carbon free. Hydro resources make up more than 40% of that portfolio. A NorthWestern Energy priority is being a good steward of natural and cultural resources at our run-of-the-river dams in Montana. Success depends on great projects like O’Dell Creek, that are made possible and made better through partnerships such as this one.”

Learn more about Monte Dolack’s Restoring Our Waters artwork and how to purchase a print at https://www.northwesternenergy.com/our-company/media-center/restoring-ou...

Learn more about Madison Food to Fork at https://www.madisonfarmtofork.org/

• NorthWestern Energy investment is $2.9 million. Partners contributed another $830,000 in the O’Dell Creek project to bring the total investment to $3.7 million.

• Over the past 14 years, 14 phases of restoration work have culminated in the restoration of 14.2 miles of spring creek, and 815 acres of improved wetland functions.

• In 2018, NorthWestern Energy, Granger Ranches, Longhorn Ranch, and the US Fish and Wildlife Service received the Society for Ecological Restoration NorthwestRestoration Project of the Year Award. The award recognizes the important wildlife habitat gains resulting from permanently protecting and restoring wetland habitats.

• Observations of rare and secretive birds such as Sora and Spaulding’s pipit.

• O’Dell Creek plateau is a staging area for sandhill cranes to breed then move to higher elevations in Yellowstone National Park to nest.

• The Madison River Valley supports as much as 50 over-wintering trumpeter swans following the successful release of juvenile birds in 2012.

• In July 2020 the state biologist captured one female at O’Dell Creek that was released in O’Dell Creek in 2016. Biologist fitted her with a GPS collar. She had three juvenile swans with her, which indicates she is a breeding female. Biologist strongly believes this bird nested in the Madison Valley. Biologist will release five swans in late August 2021 at O’Dell Creek. NorthWestern Energy provides funding to purchase the young swans, GPS tracking collars and for monitoring nesting sites. Madison Valley swans are moving to Idaho and Utah throughout the year.