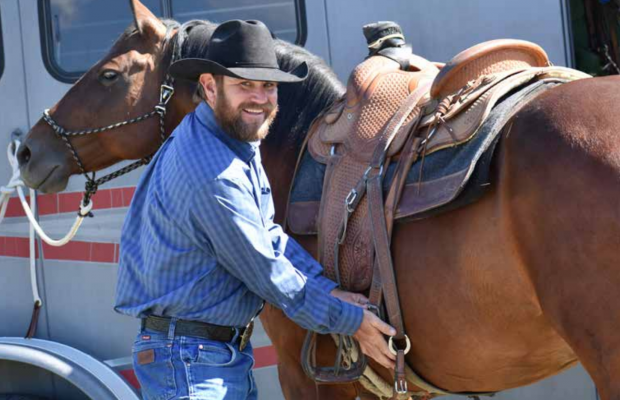 When he stepped foot on the set of “Yellowstone” a few years ago, Ennis resident and stuntman Cooper Taylor asked A-List actor Kevin Costner if he remembered him. Taylor said he responded: “Yeah, you rode with me. We delivered mail.”

For “The Postman”, released twenty-three years ago, Costner coached him through his first speaking part that was more than two lines – which he still has memorized.

“I was really nervous and of course [one of the first scenes] that I had ever done was with an Academy Award winner. Kevin directed it. He could tell I was nervous. I couldn’t get the words out – I kinda had cottonmouth,” Taylor said.

Costner was patient and understanding and took Taylor back to his trailer so they could run through the dialogue. He encouraged Taylor to relax and said if he needed to take a deep breath during the scene, he could.

“At the end of the swearing-in [scene] you’ll see I take a deep breath and then go, “Congratulations, you are now U.S. Postmen.’ I just thought that was pretty cool of a headliner like himself to take his time and work with me. I’m just so impressed with actors,” he said.

He was pretty surprised to be remembered over two decades later.

Over the years, Taylor has lived many lives – as a cowboy, a zombie, a redcoat, a bluecoat, a militia man – and “safely” died in them all. In fact, when people ask what he does for work, he always responds that he dies for a living.

Now, he does stunts for Cole Hauser, who plays Rip Wheeler on “Yellowstone”.

“I do some of [Cole Hauser’s] riding and horse stuff. There are a couple of guys who double for him, but Cole does a lot of his own stuff – he’s pretty badass,” he said. The two have also become good friends.

To be able to work with an exceptionally talented “All-star cast” in his home state is a dream come true. While Montana is the place he elects to hang his hat in day-to-day life, both sides of his family have generational Hollywood talent.

“I grew up on a set. I just thought that was normal,” he said. “Charlton Heston, Ben Johnson, John Wayne – we know his whole family. Sam Elliott and Katharine Ross are really close friends. We are all a close family. We’ve got to keep the West alive because some of it is a dying breed – and it’s scary.”

Taylor even gets to work with his father, “Gunsmoke” actor Buck Taylor on “Yellowstone”.

“Going to work with your dad is awesome. You dream of it when you’re a kid,” he said.

His mother, actress Judy Nugent – who also lives in Montana – starred alongside Hollywood greats like Clint Eastwood and Rock Hudson.

Despite his family’s experience with the spotlight, he is way more comfortable falling off a horse going full-tilt – over and over again – than having to speak on film. Hardworking and as Montana as it gets, he does not “just wear the hat”. Every belt buckle he has was earned – and they all have solid stories behind them.

What many people don’t realize is that Westerns are often the toughest to shoot.

“You’ve got animals and usually you have children – and both of those are unpredictable,” he said. “You’ve got dust... it’s hot, you’re dressed in wool. It averages out to a 16 hour day to try to get everything done.”

Still, he finds himself loving almost every minute of those long days.

“I like to live the West, play in the movies and do all the western stuff. It means a lot to me and my heritage,” he said.

A hawk screeches and circles above the creek that winds past his cabin. His horse, Boone, meanders out of the barn to say hello and his two cattle dogs bark and nip at each other.

Rural life is what he chooses, but he is willing to venture to the city for work. Somewhere in the family home there is a photograph of Taylor riding a horse before he could walk. Though he spent the bulk of his childhood in Montana, he did attend two somewhat tortuous years of school in California – the only kid wearing Wranglers when nearly everyone else was skateboarding and rolling their jeans.

While horsemanship skills are valuable to have in Montana, all the cowboying skills he has accumulated over the years – branding, roping, riding, moving and doctoring cattle – have him uniquely primed to shine in westerns.

The cast and crew of “Yellowstone” have become a kind of family and Taylor is thrilled to be a part of it.

“‘Yellowstone’” is going crazy, I mean it’s the number one rated show right now,” he said before noting the talent of creator Taylor Sheridan. “I’m telling you, he’s a genius.”

He said people are really connecting with the show – and the story it tells is notable and needed.