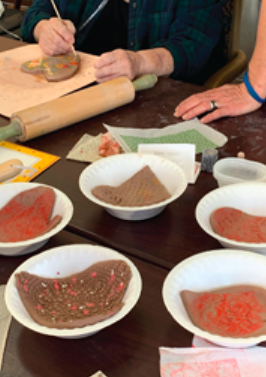 Wed, 02/12/2020 - 11:46am
By
Keely Larson
connect@madisoniannews.com
“The tactile experience, the design process, all of that is part of memory. Bringing forward memories from the past, or for little ones, what they envision for the future, and developing (their) memories,” CAROL CLARKSON, CO-OWNER OF ARTISTS ON MAIN SAID.

Many studies agree that social interaction is important for maintaining quality of life for seniors, some noting it can prevent illness by boosting the immune system. It is almost common knowledge, as is the idea that art can be used to bring people together and has since we learned  how to share crayons in kindergarten. The Ennis Arts Association (EAA) brought these two concepts together in, unsurprisingly, a creative way. Carol Clarkson, co-owner of Artists on Main, suggested they bring a pottery craft to the Madison Valley Manor. “The idea for this event came out of an Ennis Arts Association meeting last year that we had at my house,” Jan Beekman, EAA member, said. They were getting discouraged with meeting attendance, from both members and people in the community. They knew there had to be a better way for EAA members to share their skills with people around town. As a solution, the group decided to bring their meetings to the people. In collaboration with the Manor’s activities director, Leona Stredwick, participating residents rolled out a piece of clay, cut it into a heart and decorated it however they pleased on Monday, Feb. 10. The EAA hopes to continue the idea of bringing their meetings to people who may be interested in art, or who may benefit. Next month, the EAA will be going to the high school in collaboration with Humanities Montana for a presentation about the history of the trombone. “We want to encourage art in the community in whatever way we can,” Beekman said.

A smattering of residents and volunteers gathered in the sunny activities room at the Manor. Residents sat around a few folding tables placed together with their lumps of clay and EAA members rotated around, helping where needed. Residents were offered stamps, stencils and brightly colored plastic tubes of paint that squeezed out in thin lines. It looked like a mature version of decorating Valentine’s Day cookies. “It has such an influence on not only younger people, but I think older people. And this is a way for our members to kind of give back and help these folks create something they did themselves,” Barbara Gillispie, EAA member, said.

Clarkson agreed. Everyone should have access to creativity, from nursing home residents to kindergarteners. “The tactile experience, the design process, all of that is part of memory. Bringing forward memories from the past, or for little ones, what they envision for the future, and developing (their) memories,” Clarkson said. Many residents spent time just pressing their fingers and hands into the clay, examining the texture, casually rolling it around their workspace. A doily was brought out as an option to use like a stamp, imprinting its geometry on the clay. A few women’s faces lit up at the sight of this retired relic, Clarkson said. “It makes me wonder if in their past maybe they did some crochet work,” she said, or maybe if they had doilies all around their houses growing up. A direct exhibition of art’s ability to bring forth memories. Clarkson will fire the clay and return it on Valentine’s Day to residents who participated. Hopefully, residents look upon their pottery with pride and place them somewhere in their rooms.