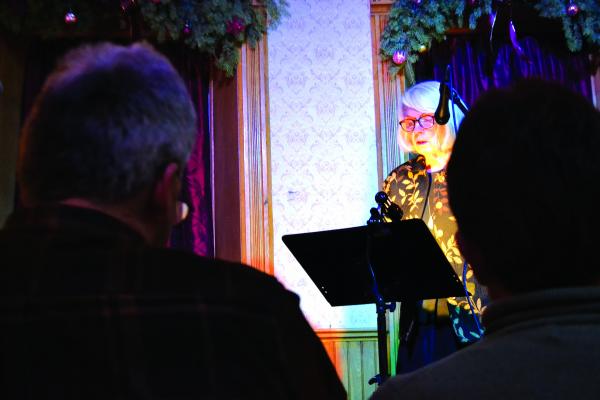 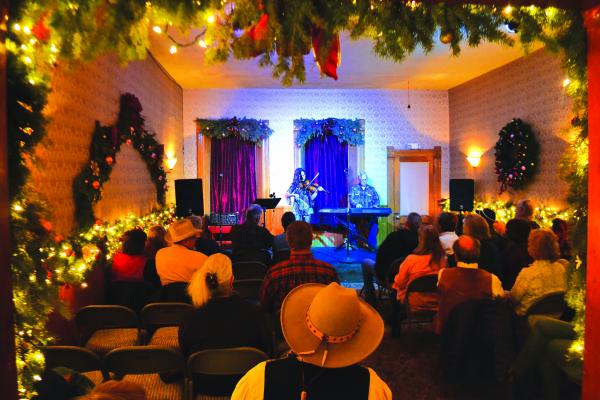 VIRGINIA CITY—The Elling House Arts and Humanities Center was nearly filled on Saturday, January 19 for the first of four Chautauquas, an annual series the center hosts that allows local artists to perform readings, music, poetry and other hobbies to a local audience.

The practice of the Chautauqua is named for the lake in western New York near which it was first created in the 19th century. The first known Chautauqua took place in 1874 and is now known as the “Mother Chautauqua” due to all the satellite events that spread from the initial iteration of the performances.

When they first got started, Chautauquas included lecturers and speakers, musicians and even worship and sermons, though they largely remained nondenominational and apolitical. They would often allow performances or speeches by members of most any party who wished to speak, as in 1936, when the original Chautauqua Institution hosted presidential incumbent Franklin Delano Roosevelt, as well as his challenger Alf Landon and even some third-party candidates who were also running.

The practice grew in popularity into the 20th century, largely fading by the 1950s and 1960s. They were often compared to vaudeville shows, but attempted to set themselves apart by their dedication to educational content and “wholesome” entertainment.

There was even a Chautauqua tour in 1925 by a troupe called the May Valentines Opera Company that brought the events to Montana. The tour began in Alabama, and several months later finished up in Sidney, Montana.

While Chautauquas might have reached their height in the 1920s—when millions of Americans in thousands of communities gathered to hear music, readings and speakers—the idea is alive and well in Virginia City.

Saturday’s event saw only four performers, but event organizer Toni James expects double that or more at the subsequent events in the series. The January Chautauqua included poetry readings, piano, fiddle and banjo music and singing, all after a community potluck and social hour. With such a small number, performers did two sets, each taking two turns to show off their talents for an audience of several dozen on a chilly winter evening.

The February, March and April Chautauquas are open to anyone in the community who would like to attend or perform. Each participant is allotted time enough for one or two songs or a reading of about five minutes, with 10 reserved slots plus a couple swing spots for spur-of-the-moment performances.

The 2019 Chautaqua Saturdays will take place on February 16, March 16 and April 27. Performance spots can be reserved at Rank’s Mercantile in Virginia City, or those who wish to just observe can bring a dish to share for the pre-performance potluck at 6:30 p.m. and the show at 7:30 p.m.