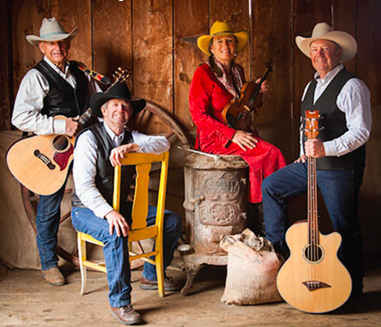 A band that pokes fun at each other stays together

The boys of the Ruby Valley Boys knew each other while going to college at Montana State University (MSU). They played at the Eagles in Bozeman together, appreciating that venue for its sizable dance floor. “It’s a whole lot easier playing when people are dancing,” Jim Anderson said. His brother, John, echoed that sentiment by saying it is a good indicator of enjoyment if people are up and dancing. There are only a few round, barrel-looking tables inside Willie’s Distillery, host of the Ruby Valley Boys and Barb Wire Friday night. The place gets full quick, especially if a four-piece band is setting up next to the front door. The sound guy, with iPads set up to regulate sound, thought it might have been the smallest place he mastered. The Anderson brothers and current guitarist, Steve Wilcox, rotated through different bands since they started playing instruments. Wilcox threw out a couple clever names of bands he had been in, one called Custer’s Last Band made up of residents of Custer County. Wilcox moved back to Madison County and the three boys ran into each other, leading to the formation of the Ruby Valley Boys in the 1990s. “Now we’re more like the Ruby Valley Geezers and good ole what’s her name,” Jim said. Consistent and comical banter floated throughout the conversation at regular intervals. Barbara “Barb” Pearson joined just before 2010 and added the “Barb Wire” element to the band name. She goes by Barb and her violin has strings or ‘wires,’ she explained, putting two and two together. “She’s a little prickly sometimes,” John said. Now, the band has two rules. They do not play in bars and the moment it stops being fun, they will quit. “We violated rule number one a few times, but we’re still having fun,” John said. Family reunions, get-togethers, funerals, barbeques and a variety of other venues around the county make up the majority of their sets. Trying to rule bars out made them a little less marketable, but they had a solution for that. Approached by the National Stagecoach Freight Wagon Association, the band was asked to put on a barn dance. A historic barn on the Anderson Ranch property, just outside of Alder, was the perfect place and the band and friends got to work cleaning. Prepped for 200 or so people, the event ended up hosting north of 300 and ran out of food twice. The barn was originally built by C.X. Larrabee. Larrabee came to Deer Lodge to be a partner in a banking firm and eventually discovered the Mountain View Copper Mine near Butte. Both the Anderson’s Ranch and Ted Turner’s were owned by Larrabee at one point. The Andersons’ grandfather immigrated from Denmark and bought the ranch from Larrabee’s estate, starting a sheep ranch in the early 1900s. Estella, their mother, had musical inclinations as well, singing and playing guitar in a band called the Beaverhead Rangers. “She’d always had us sing ‘cuz that would keep us from fighting,” Jim said. It worked, and the boys had memories of ‘car karaoke,’ singing tunes like You Are My Sunshine and Big Rock Candy Mountain, trying to ignore their tone-deaf father. Wilcox has music in his blood and in his brain. He recalls childhood songs with surprising ease. Wilcox’s dad played guitar and traded a paint spray can to his brother to get Wilcox his own. “I just played with my dad, just plucked a couple of strings,” he said, eventually learning his chords. In the 1930s, Pearson’s grandfather gave a neighbor some eggs and received a violin made in 1906 in return. Pearson still has that violin and started her musical endeavors as a concert violinist, performing with the Bozeman Symphony among others. After moving to Ennis, traveling to rehearse became arduous and she took up the fiddle. One night, while working at the Elks in Virginia City, Pearson ended up playing with the boys as an impromptu audition of sorts. They told her she could stay and across the gender divide the boys learned some fiddle music and Pearson learned some cowboy songs. Pearson’s grandfather came from Ireland to homestead in Big Sandy, Mont. When she was a toddler, Pearson and her mother lived in Charlie Russell’s house, a name every native Montanan knows. At Willies, Pearson would occasionally have to move over a bit to make room for people to get in the front door. Before they plucked their first strings, the band members made their way to the back counter to order cocktails. Visitors mingled, conversed, ordered cocktails and clapped after each song. The boys would ask listeners if they knew who sang the original version of the song just played or would point tidbits out about tunes, like how the last they just did was about Charlie Russell. “We held together for the last 10 years or so as a group,” Pearson said. With their combined musical roots, playful banter and love for storytelling, they seem to be on track for another ten. As long as they keep having fun.