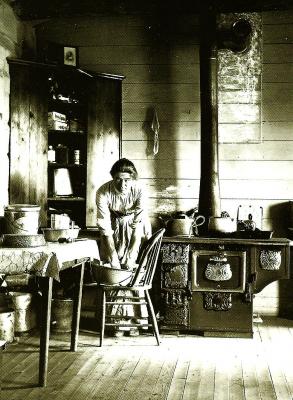 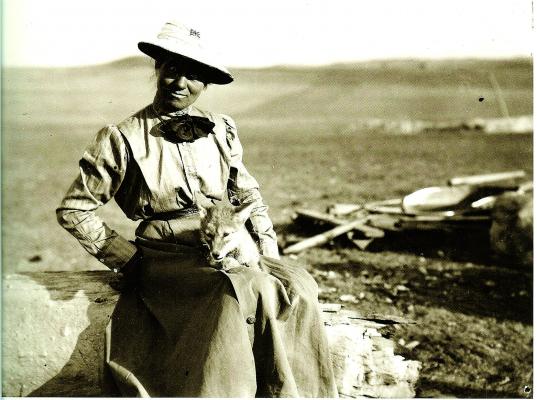 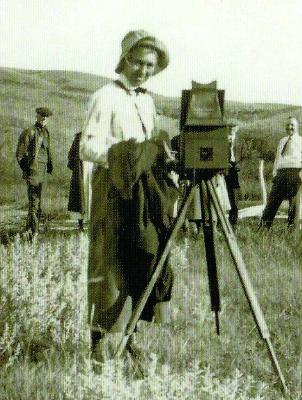 VIRGINIA CITY—Mary Jane Bradbury has a background in acting, but sees herself more as an interpreter. When it comes to teaching people about history,she makes a distinction.

“It’s not just a matter of spewing information,” she says. “Taking that information and what you know, how would that person tell their story? I think everyone who listens to one of these stories sees a little bit of themselves in these people. They start to listen as if I were that person, telling you a story of my life. It has to do with the listener as much as the storyteller.”

On August 9, Mary Jane Bradbury will visit Virginia City, but it will be Evelyn Cameron who walks into the Elling House Arts and Humanities Center that evening.

Evelyn Cameron died in 1926, but Bradbury has learned so much about her that she can seamlessly adopt her persona, as she’s done with legendary congresswoman Jeannette Rankin, Nancy Russell (businesswoman and wife of painter C.M. Russell), artist and naturalist Martha Maxwell and others during her career. After 40 years spent in Colorado, Bradbury moved to Montana in 2014 and has traveled from Libby to Ekalaka and everywhere in between, always doing her favorite thing: telling stories, in her own unique and engaging way.

Who was Evelyn Cameron?

Bradbury has spent months becoming an expert on the life and times of Evelyn Cameron.

A British expatriate who immigrated to the United States in the late 19th century, Cameron left behind a life so privileged that she never had to brush her own hair — for pioneer life on the plains of eastern Montana with her naturalist husband. She never looked back.

“She truly found her joy and her passion here in the West,” says Bradbury. Cameron fell in love with the plains of Montana, and became a self-taught master of western photography. Even with the advent of film photography, Cameron stuck with the original—and cumbersome—glass plate technology. She carried plates with her on horseback, with her camera (which measured a cubic foot) around her waist and a tripod she carried in a rifle scabbard.

Soon Cameron was capturing the essence of what pioneer homesteading life was like at the turn of the century in eastern Montana, as well as the natural world around her. It wasn’t unheard of her to display her characteristic patience and stoicism by waiting an hour or an afternoon, just for a bird to return to its nest so she could capture a photo of it.

But how does Bradbury know all this?

A trove of history

During her life, Evelyn Cameron lived in three ranches on the eastern plains of Montana. She spent a large portion of her life on a ranch in Terry, between Miles City and Glendive. Unbeknownst to many, she left behind a meticulous record that spanned decades when she died in 1926. Later, that trove was uncovered by historian and editor Donna Lucey, who then spent years cataloging the discovery and writing the book Photographing Montana: The Life and Work of Evelyn Cameron, which was published in 1990. Today, there’s a museum in Terry dedicated to Cameron’s legacy and art.

Like many women at the time, Cameron kept journals of her daily life as a pioneer woman. On that ranch in Terry, she filled 35 volumes, one for each year she spent on Montana homesteads. Along with those journals were more than 2,000 photographs and 1,800 surviving glass photography plates. Altogether, she created what might be the most complete record of Montana pioneer life anywhere in the state.

“All of a sudden, here’s this whole package of a story and the picture that it painted of life on the eastern Montana frontier,” says Bradbury of the discovery. “She made an interesting choice with her life, and because of it we have this complete picture of what life was like.”

Because so many artifacts were left behind from Cameron’s life, Bradbury’s interpretive program will be half in-character and half as herself, so she can interact with the audience using a presentation of some of Cameron’s photographs. Bradbury calls it learning the photographs that made the life.

“We’ll look at the connections between a human being who chose all that in her life, who needed to express herself, and the art that she created,” she says.

One extreme to the other

Her stop in Virginia City is one of nearly two dozen presentations Bradbury will give in 2018, an itinerary that spans the state. From hundreds of students in Billings schools to the one-room schoolhouses of Carbon County, Bradbury has brought history to life—literally—for students and communities all across Montana.

She was artist-in-residence at the C. M. Russell Museum in Great Falls through this past January, and is also a speaker for Humanities Montana, which facilitates a week-long stint in Kalispell every year “like an itinerant storyteller that comes to town,” she says. And no matter the size of the audience, the communities are always grateful, and she always leaves with new connections.

“I go from one extreme to another in terms of the size of the town,” she says. “But it doesn’t matter. Once we engage, we have so much fun. Regardless of age or circumstance, to connect with people who have their own stories, to share that with them, is just so rewarding. Not a minute goes by that I’m not happy I made the choice to come to Montana.”

Bradbury’s—and Evelyn Cameron’s—visit to Virginia City, titled “Pluck and Stamina: The Life of Pioneer Photographer Evelyn Cameron,” will take place on Thursday, August 9, at 7 p.m. at the Elling House Arts and Humanities Center. Admission is by donation and the event is open to the public.