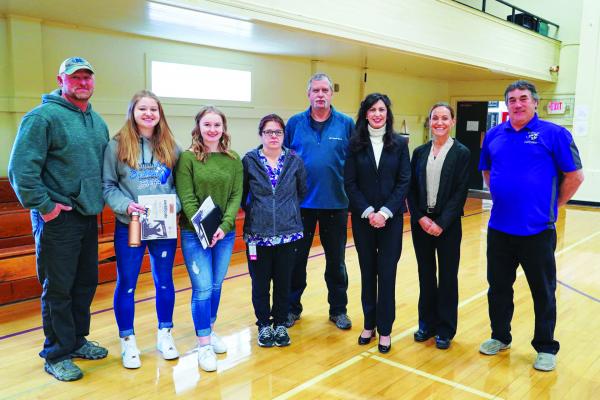 Winners announced in ‘What does the U.S. Constitution mean to me?’ contest

Six Montana students have been recognized for their work in the 2021 ‘What does the U.S. Constitution mean to me’ contest constructed by the Montana YouthVote Program.

Students from Sheridan, Livingston, Townsend and Belt were named winners in the contest, which was eligible to all Montana students K-12.

Under the guidance of the Youth Voting Act, the Secretary of State’s Office and the Office of Public Instruction are partnering to bring Montana schools an opportunity for students to engage in learning more about our government. The YouthVote Program unveiled a new website on Constitution Day, and announced the inaugural US Constitution Contest, where students could submit essays, artwork, poetry, music and any other entry they chose related to the topic of the US Constitution’s meaning to them.

“I felt really good about it. I put a lot of time into it, and (government teacher Mrs. April Wuelfing) was a ton of help with giving us edits and things like that,” Nate said of her submission. “I didn’t think I would get first, but I hoped I would do pretty well. I was pretty proud of my essay.”

“I did my two amendments, the 1st and the 19th, women’s suffrage and the rights of the people, which is what our entire society is based on today — everybody getting equal rights and freedom to do what they want,” said Grow. “That’s kind of what made it easy because I was very opinionated on that part.”

Belt’s Sarah D. was runner-up for her poem, The American Boy.

Sixth-grader Molly G. of The Way Christian School was named the middle school winner after writing and singing her song, What the Constitution means to me.

“I’ve been writing songs for a long time, since I was 4 I would write little songs. This is the first time I actually did something with one,” Molly said. “Once (the contest) said something about (submitting) music, I was really excited about that, also. In school, we’re learning about the Amendments, and the lyrics, I don’t know, I just researched, watched a video about the Constitution, and it all kind of came to me.” Townsend Middle School classmates Lexi D. and Logan B. submitted the second- and third-place entries, respectively, in the middle school level. Townsend had the highest percentage of participation of any school in the state thanks to the effort of teacher Denise Bakkum.

“As a former government teacher, I can tell you that you want to hang on to this,” principal Brad Racht told students of the US/Montana Constitutions they each received. “When you get to high school, you’ll be surprised how many times this will come in handy as you write papers and (eventually go into the world).”

All entries to the US Constitution Contest can be found on the Montana YouthVote website.