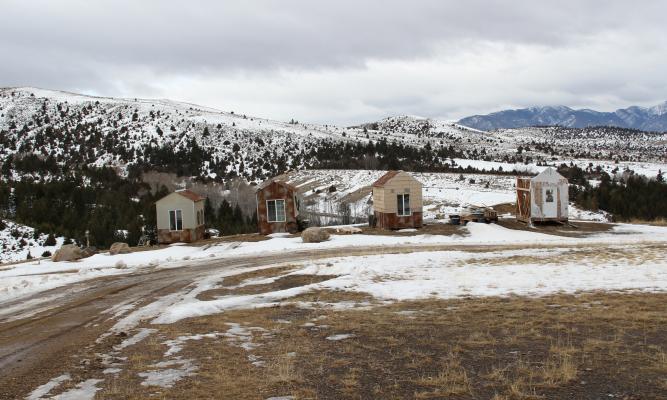 VIRGINIA CITY -- Virginia City Town Council is taking action against the owner of four small sheds in violation of town zoning ordinances - but decided to give the sheds' owner more time to take action. Council approved a second letter to shed owner Billy Doyle during it Feb. 1 meeting.

Council president David Bacon chaired the meeting, due to the absence of Mayor Justin Gatewood. Bacon reported the mayor sent a letter to Doyle in November or December regarding the sheds, and confirmed that Doyle had received the letter. The letter provided Doyle three alternatives: remove the sheds, relocate sheds to properties with primary structures, or request a site zoning permit to construct a commercial or residential building on the property, greater than 500 square feet in size (a primary structure) and have the sheds designated as out-buildings. In the letter, Doyle was given 30 days to respond to council.

Bacon reported Doyle contacted the mayor and the shed owner and mayor discussed the issue at length. As a result of those conversations, Gatewood prepared a second letter for council's consideration, which reiterates the three options, but gives Doyle until May 31 to take action on the sheds. "Basically, the issue in front of us is to stay with the original letter or go with the second one," said Bacon.

"Being as that's what they've been discussing in their communications, I would go with the second letter," said councilmember Jon Osborn.

"If we move the deadline up to May 31, then what?" asked councilmember Erin Leonard.

"Then there will be fines," said Bacon.

Council voted 3-0 to approve the second letter, giving Doyle until May 31 to take action on the sheds.

Historic preservation officer Jim Jarvis updated council on projects in the town. Jarvis reported a cultural resources survey for a 3 Rivers Communications fiber-optic cable installation was delivered to the town office. The company plans to start the project in May, but has not decided how to install the cable. Jarvis said two contractors are bidding on the project - one which does horizontal boring (least intrusive), and another that uses traditional trench excavation.

"The one question I had from a cultural resource perspective, in terms of disturbing the land, was how deep are they going to go," said Jarvis. "But it's 32 inches, is the depth, so it's relatively shallow compared to other utilities."

The HPO described the locations where the 3 Rivers plans to install fiber cable. "All the way up the gulch, all the way around town and all the way down to Granite Creek," he said. Copies of the resource report are available for public inspection at the town office and library.

Madison County Emergency Services Director Dustin Detrault presented an updated pre-disaster mitigation plan for council's approval. The county commission adopted the plan on Jan. 30 and Tetrault is visiting town councils to request their adoption of the plan. The director explained he's been working on the plan for two years. “ It's been LEPC (local emergency planning committee) meetings, public meetings, six versions that have gone through, and this is the final version and I still found a couple more items that need to be changed,” he said. “I'm just going to do it myself because they're just address typos and little small things.”

Detrault explained the town could receive FEMA hazard mitigation funding only for items that are addressed in the plan and discussed action items in the plan. Council adopted the plan with a 3-0 vote and thanked Detrault for his work.

Public works director Bob Rudolph reported painting had been completed at the community center and the work looks good. Work on the center's bathrooms will be next. Repairs to the town snowplow have been completed, but the plow is in poor mechanical condition. A state-owned snowplow arrived from Helena and Rudolph plans to execute a memorandum of understanding with the state for use of the plow.