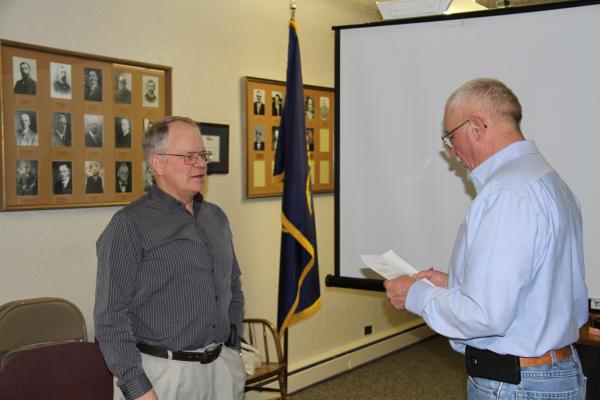 SHERIDAN -- Sheridan residents likely will see a water rate increase in the near future, due to the need for a new well and the loss of state funding for its water project. During its meeting Monday, Sheridan council received a briefing from Dan Kramer with Montana Rural Water, which included a preliminary rate proposal for the town.

Taking into account the cost for the new well and the amount of debt the town will incur, Kramer said the monthly water rate for town customers with a 3/4-inch service line should be set at approximately $45.40. However, with an optional usage fee imposed on customers who consume more than 20,000 gallons, the rate could be reduced to approximately $41.68.

Council will consider the rate proposal and options for the usage fee as it moves forward with planning the new well project. Public hearings for any rate increase will be conducted, once council reviews the expert proposal and agrees on a rate.

Mayor Robert Stump reported the town received approval from the Department of Environmental Quality for a new well site near Kearney Lane, and a test well will be drilled soon. The town received two waivers from the DEQ for the well site, one for a well exclusion zone, and a second waiver due to the proximity of a canal.

Due to state budget cuts, the town lost a $625,000 Treasure State Endowment Program grant for the water project in January, and now will seek state-sponsored loans for the project. The result of the new debt burden will be higher rates for town water customers.

Sheridan Public Works Director Curtis Green reported the town water system is currently relying on one well, due the the mandatory shut-down of another well due to a bacteria alert. Green confirmed that the bacteria was not e-coli, and he expects the second well to be placed back into service soon.

Kramer displayed a chart with information on the town's water system. The chart indicated the system has 392 connections at 3/4-inch service line, four connections at 1-inch, eight connections at 1.5-inch, and one connection at 3-inches. The town serves 447 equivalent dwelling units, a water-use figure used in calculating rates.

Kramer's chart indicated Sheridan currently pays $29,817 in annual debt for its existing water system. Annual debt would increase to $42,612 once loans are obtained for the new well project, according to the chart.

Rural and Tribal Environmental Solutions consultant Sarah Robbins suggested the high-use rate be implemented at the 10,000 gallon level to encourage water conservation. Stump and councilmember Mike Walter expressed support for a high-usage fee to reduce the base rate and encourage conservation, but did not state a preference at which level it should be established.

Kramer noted the town has 52 domestic wells and discussed a variety of problems that public water systems can encounter due to domestic wells, including water depletion and contamination of the public system. The expert said Sheridan's sewer rate of $43 per month is low compared to other Montana towns.

• Council contacted member Dan Durham by telephone to receive a vote and installed councilmember Paul Kramer by a 3-0 vote. Stump administered Kramer's oath of office. Durham was not present due to his family welcoming a new baby the day prior.

• Green reported GIS mapping of town infrastructure, including manholes, storm drains, valves and water and sewer lines, was proceeding well. The town received partial grant funding for the project, which allows town officials to mark the location of infrastructure items with a smartphone application. Green also reported contractors had roughed-in electrical at a new town shop under construction.

• Following a briefing by Madison County planning official Leona Stredwick, council approved a subdivision at the corner of Montana and Mill streets, which will create two equal lots of approximately 9,950 square feet. The county planning board had recommended approval of the subdivision.

• Approved a pledged securities statement that indicated a $28,427 shortfall. Paul Kramer explained the shortfall was within norms, and could be accounted for with payments that have not been received.

• Town resident Allen Schallenberger told council he was disappointed with traffic safety in town, especially the practice of making u-turns into diagonal parking spaces, which he says creates a hazard for drivers. Sheriff Roger Thompson said u-turns are legal in Montana, if done safely, and the Sheriff's Department would not be allowed to enforce a town ordinance against u-turns. The sheriff said the town could enforce such an ordinance, if it had a town court. Schallenberger said he is pursuing state legislation against u-turns.

• Thompson reported law enforcement problems have been minimal in Sheridan this winter, and low throughout the county. The sheriff said the low level of problems has allowed his deputies to continue investigations into older cases.

• Council approved a water/sewer hook-up rate reduction and payment schedule for the buyer of a property at 319 W. Poppleton St. The property is unable to connect to the town sewer system via gravity flow.

• Fire chief Ben Hitchcock reported the fire engine has been repaired and the department has 12 members. Hitchcock said it's been a slow month for the fire department.