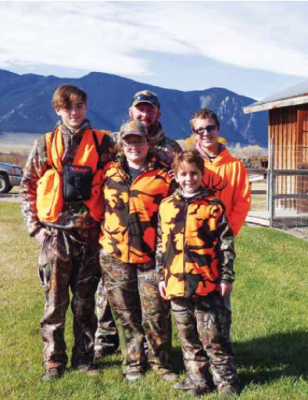 It used to be that Labor Day marked the end of “the season” in Montana, until ski season began after Thanksgiving. The months in between, when business and restaurants shutter and their owners can catch a breath (and if lucky, head to Mexico), are often called the “shoulder seasons” also known in the springtime as “mud season.”

Things may be changing.

“We ‘shoulder’ a lot during that time, even though it’s typically when things start slowing down for outdoor recreational activities,” says Dave Delisi, Outreach Coordinator, Ruby Habitat Foundation.

The Foundation, headquartered at the site of the historic Woodson Ranch in the Ruby Valley, is dedicated to “preserving and enhancing the natural resources, and social and economic makeup of the Ruby Valley and southwest Montana…” according to its mission statement. Part of that mission is providing “managed public access for both educational and recreational pursuits.”

That public access isn’t limited to a few months of the year. Delisi said this hunting season was busy. “We scheduled 130 hunters on the ranch, each with their own blind or stand and we took 66 deer off the property this fall.

That’s about a 50 percent success rate, -- relatively high compared to data collected at the various Montana Fish, Wildlife and Parks (FWP)-monitored game check stations this fall.” He reported that “Our rate of CWD [chronic wasting disease] on the ranch this year is zero—with 37 test results back to us so far. That could change, of course, but for now, we feel pretty good about it and hope it might be related to our management practices which have been focused on controlling the size of the ‘resident’ deer herd.”

This year’s hunters included a disparate group, from youngsters participating in the FWP’s Youth Hunt to a small brigade of The American Mountain Men who hunt with flintlocks and wear 1830’s-era clothing.

The group’s Chief Purser, Sheridan resident Tom Roberts, said “We are very grateful to the Ruby Habitat Foundation for permitting us to live the life, even if just for a few days, of the Rocky Mountain fur trappers, and to ‘make meat’.”

Roberts enjoys Ruby Habitat every month of the year, whether it’s working his dogs or volunteering to help with the hunt program, and doesn’t recognize a shoulder season.

“The ranch changes throughout the year. It demonstrates that with good management, all users can share the same land.”

According to Delisi, Ruby Habitat Foundation does not charge a fee for the hunting program, or any of the other access programs.

“We are a non-profit and encourage folks to consider making a tax-deductible donation. But it is strictly voluntary.”

The Foundation is a 509(a)3 support organization for The Montana Land Reliance, a 501(c)3.

Asked if the Ruby Valley shoulder season may become a quaint relic of the past, Delisi thinks that, anecdotally, Ruby Valley is headed toward extended visitor seasons.

“Flyfishing has become more popular, and in recent years people have been making reservations for the summer season earlier and earlier. Typically, our summer season is fully reserved by February,” he said.

Ruby Habitat limits the number of fishermen per day. Now more people are coming either earlier or later in the season.

Looking back at the last two years, Delisi is optimistic that in the near future more people will visit and benefit from the Woodson Ranch.

“After a tough 2020 which saw our visitation numbers drop below 1000 for the first time in years, 2021 brought people back to the ranch in greater numbers,” he said.

“We will close 2021 with over 1600 people having visited.” Considering that Ruby Valley is not on the well-travelled tourist trajectory between Bozeman and Yellowstone National Park, Delisi was asked which aspects of Ruby Habitat attract visitors.

He says number one is the flyfishing program that hosted nearly 400 anglers in 2021. Hunters comprise the next-largest category with a total of 230 having tried their luck so far. White-tail deer is the most popular game (about half of the total hunters are aiming for a white-tail). The other half have gone for game birds: waterfowl or turkey.

Delisi says people also come for exercise, birding, and wildlife-watching on the nature trail which is open to the public (check website for closures). Accessing other portions of the ranch require prior permission which can be obtained by emailing dave@rubyhabitat.org

More information is found at rubyhabitat.org