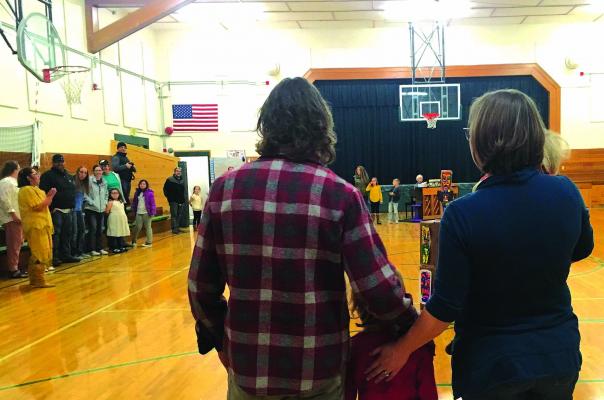 “This has been an annual event for so long, I can’t even say how many years,” said McKay to a packed gym on Monday evening. Well over 200 friends and family members attended to watch the program. “I started it back when I taught kindergarten and it just kept going.”

The students danced and sang with abandon for the huge crowd, drawing laughs and cheers from around the gymnasium. McKay’s program included songs that acknowledged the cultures that welcomed the passengers on the Mayflower and brought about the first Thanksgiving: the many Native American tribes that called North America home long before European settlers arrived.

The program included songs from the Cherokee, Sioux and Navajo cultures and even an old Eskimo song, sung in the original languages and accompanied by dancing and handmade instruments, as well as McKay on a traditional drum and a piano accompanist.

There were also Thanksgiving songs like “Five Fat Turkeys,” about a flock of the birds that lives in a tree to avoid becoming Thanksgiving centerpieces, and a couple of renditions in American Sign Language.

A final rousing performance of “My Country ‘Tis of Thee” welcomed students’ parents and siblings to join in as well, filling the elementary school gym with song. If its ongoing success is anything to judge by, it looks like the Ennis kindergarten Thanksgiving program will continue to be an annual tradition for years to come.