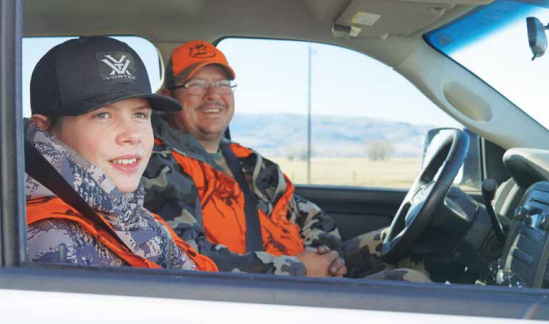 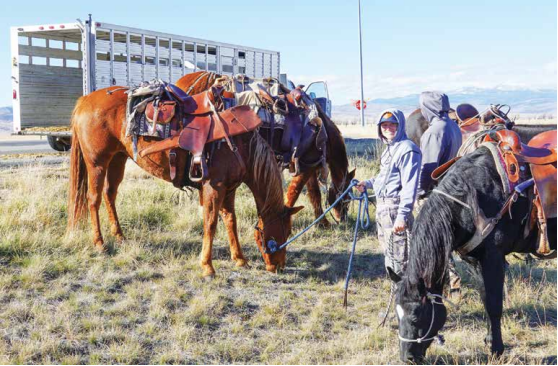 You wouldn’t know by looking at it, but the single-wide trailer parked on a Montana Dept. of Transportation pull out just north of Cameron is where information is collected and exchanged, and where hunters can congratulate themselves or shrug in resignation that today wasn’t their day. It’s like a lowtech internet but better – most folks who stop to check in with Montana Fish, Wildlife and Parks (FWP) staff are in pretty good moods. After all, they’re in Montana, in the mountains or valleys or riparian areas, and it’s hunting season.

FWP wildlife biologists who staff game check stations in Southwest Montana’s Region 3 meet the public with equal equanimity. It’s a chance to visit with people, find out what’s going on in the public hunting lands, and share information. And more. On the second Saturday of general hunting season, Austin Adams, a fish and wildlife senior at Montana State University who is assisting FWP on weekends, alerted hunters that they had a flat tire, and then helped change it. This involved unloading a string of horses from a trailer, but it didn’t seem to dampen anyone’s good humor.

One of the hunters, Connor Johnson of Whitehall, was tasked with holding the horses who, unperturbed, grazed on the grass next to their trailer. When asked if his party had any luck hunting behind Wall Creek, Johnson grinned broadly and shook his head. “We were trying to get a couple of bulls. But we had a really nice ride.” By all reports, the 2021-22 general hunting season opened with a bang. FWP proclaimed the first weekend, Oct. 23 and 24, “above-average success” in some areas. Turns out the top two areas in FWP’s Southwest Region 3 were in Madison County: Alder and Cameron.

While most of the harvested game were elk and deer, small numbers of black bear, pronghorn and moose were also reported.

Hunters who stopped at the Cameron check-in station the weekend of Oct. 30 and 31 also had “above average success.” Although fewer hunters checked in last weekend, their success rate for deer and elk was 12%. They harvested 39 elk, four mule deer bucks, one white-tailed doe, and three pronghorn.

“We lost some snow, so the animals are higher up, away from roads and trails,” Julie Cunningham, FWP wildlife biologist, observed. “Last weekend snow brought them down in elevation, made for better tracking.”

Hunters are required by law to stop at any game check stations they pass, whether or not they’ve had success in the field. The data collected on hunter participation and success, and the type of game harvested, help inform wildlife management policies.

As Cunningham points out, “the data we get is important, but this is also about being available to our public, to landowners and hunters.”

Acknowledging that wildlife biologists are sometimes hard to access by email or phone, Cunningham said “this is an opportunity to have time to talk with people and answer their questions. We want to be a resource to the county.”

Cunningham is well-known in Madison County and greeted many hunters by name. She celebrated her 15-year work anniversary on Oct. 31. While many of the vehicles that rolled into the checkpoint had plates from Montana or nearby states, there were also license plates from New Hampshire, Pennsylvania and Wisconsin.

Meanwhile, Austin Adams, the MSU senior and weekend assistant, continued to greet hunters with a smile, clipboard in hand. “I love the outdoors,” he said. “I grew up hunting and fishing in California and in Georgia and want to keep it a part of American culture.”