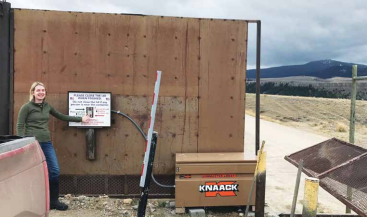 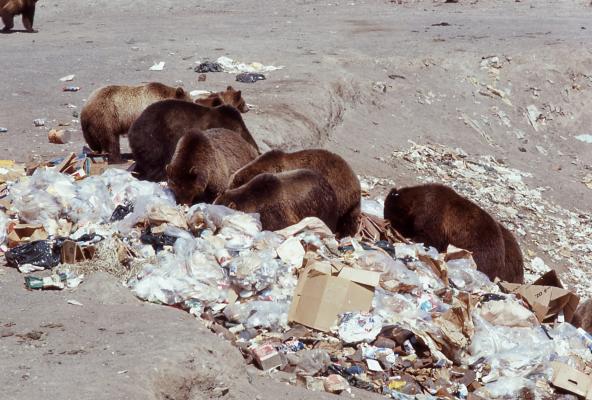 A dump with a view – but no bears

Tikker Jones, life-long Madison County resident, recalls seeing bears feed in open dumps around Yellowstone National Park as a child. In fact, up until the 1960s, regular evening entertainment for tourists was watching black and grizzly bears amble to open dumps at dinnertime. Fortunately, wildlife management approaches have evolved considerably over a lifetime. Jones, a member of the Madison County Solid Waste and Recycling Board, demonstrated how far the county has come with an improved, hydraulically operated container station on Palisades Dr. in the Upper Madison area. “We worked with the county, [conservation biologist] Steve Primm, and private donors to install equipment this spring that keeps bears out effectively,” Jones said. Funding came from area residents, as well as from the Greater Yellowstone Coalition. Not only will the new lid system prevent bear dumpster-diving, but it is also user-friendly. Residents can park close to the container, push one button to raise the lid, dispose of their trash, then push a different button to close it. When Barbara Fields and her husband Chuck managed the West Fork Cabin Camp, they sometimes made more than one trip a day to the container station. Prior to this year, the station had manually operated steel lids to deter wildlife “I had a hard time lifting those lids,” she recalled. “Now you just push a button. Steve [Primm] is a bear expert, and he took on the task of finding the right technology and raising donations to pay for it. Now it’s benefitting all of us who live in the area.” Asked if she or Chuck had seen any bears this summer, Barbara said she hadn’t, but some neighbors reported bears feeding on wild chokecherries in the Upper Madison. In addition to making life easier for people who live in the Upper Madison area, the container station offers a breath-taking view of the Walker Game Range and the Palisades formation. The station, on land leased from the Bureau of Land Management (BLM), has operated since 1981. Primm explained how the county got ahead of two issues: more people and more bears. “Over time, population growth has increased waste volume at remote sites like Palisades. Recreational use of the river corridor nearby has also grown substantially. And since the mid- 1990s, grizzly bears have re-occupied historic range in the Madison watershed, becoming increasingly common in that time,” he said. “More garbage, more bears, and more people in the vicinity of the Palisades facility meant that it was time to do something to prevent bears and other wildlife from accessing the garbage as an unnatural food resource.” While the main concern of Primm and Jones was to eliminate the site as an attractant for bears (it’s close to the Palisades recreation area and campground), the new protective cover will also keep ravens away. The large, noisy birds immortalized by poet Edgar Allen Poe and (depending on how you feel about it) the Baltimore Ravens NFL team, are notorious for ripping open bags of trash that can be blown by Madison Valley winds to nearby roads and homes. Primm and Jones recall that in the past, up to 40 ravens have been seen atop the container. The Palisades station is modelled after the successful Nevada City hydraulic container station, the first to be installed in the county. Pony may be the next potential site. The areas are prioritized according to the potential for bear problems. Not all Montana counties have been as proactive. Earlier in October, two juvenile grizzlies climbed into an open Park County dumpster. Montana Fish, Wildlife & Parks tried unsuccessfully to trap the two youngsters, but they seem to have fled the scene of the crime. Where are the bears? Has the bear population increased in the Upper Madison, perhaps beckoned by lush chokecherries and the river? Primm says that while the usual habit of black and grizzly bears is to remain in the security of the forests, they will move through open areas like the river corridor at night. In May 2019 a large male grizzly was struck and killed by a vehicle on Highway 287, about five miles from Palisades. “So far no grizzlies have been seen around the container station,” Primm said. “The county does a good job of regularly removing trash from here.” Since Madison County doesn’t have a landfill, trash must be hauled to a landfill in Logan, in Gallatin County, or in Dillon, in Beaverhead County. Primm says there’s no denying that “now there are more grizzlies than there used to be. The population has increased since the mid-to-late 1990s, and they’re starting to re-inhabit some of their historic range.” Primm pointed out that at one time grizzlies ranged as far east as the edge of the Great Plains, to eastern Kansas and western Minnesota. While bears can no longer be sighted easily at garbage dump banquets, hunters and hikers should still beware while in the woods this time of year. Primm says bears will be active from now until they start to den in November, and most will be retired for the winter by late November/early December.