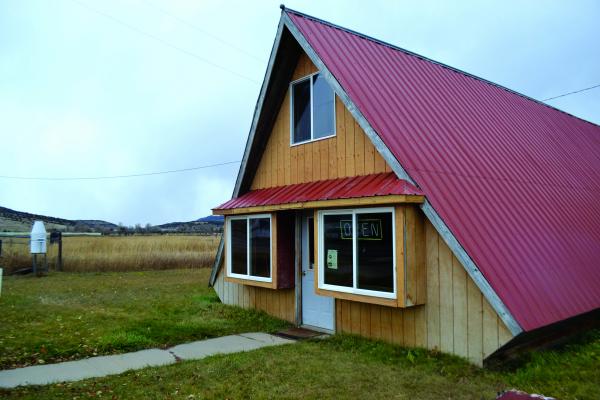 CARDWELL—Madison County’s main animal shelter, based on Jefferson Island just outside Cardwell, will soon move into a new location thanks to the purchase of the building that has housed one of the town’s best-known businesses.

Misty Hammerbacker has run 4 Paws Rescue out of her own home for the past several years. She keeps dogs and cats in her home, yard and garage, as well as the occasional rabbit, bird and even llama when the situation demands.

Hammerbacker worked at Clay’s Calico in Cardwell for over 15 years, a business known for its locally crafted clays, woodworks and gifts. When the building’s owner told her of the intention to close and sell the space, Hammerbacker jumped at the opportunity to expand her rescue efforts, and the purchase became complete at the end of September.

“It’s going to be really, really great,” she says. “But there’s a lot we have to do before then.”

That includes transitioning the building from a retail space and clay firing studio into an animal shelter, which will begin with removing what Hammerbacker says is “about 50 years’ worth of dust” from under well-loved kilns and the many shelves where unfinished clay works awaited their finishing touches.

“We have some volunteers who have helped us out a lot, and we’ve gotten all the new carpeting donated, plus a new washer and dryer,” says Hammerbacker. “The Madison County commissioners help us too, another reason I’m so happy to be a citizen of Madison County.”

Hammerbacker has had people drive from as far away as Washington and Colorado to adopt animals from her. Once the Clay’s Calico building gets prepped, it will be a huge increase in space and will allow 4 Paws to greatly increase its services.

There will be designated areas for dogs, cats and even birds, plus an area right at the front window where potential adopters can “window shop,” looking at puppies or kittens awaiting a home. Hammerbacker plans to repurpose some of the business’s old stacking tables—towers that look like they could be particularly appealing to feline playmates.

“We have to get the yard fenced in, which will be more expensive than I realized,” she says. “It’s going to be a long process getting everything ready, but it’ll be great when it’s all done.”

The new 4 Paws will also implement a program in place in other shelters around Montana and the nation.

The Ashley Perry Animal Shelter Reading Program originated in Alaska and has spread nationwide, offering young readers a chance to practice reading out loud to an unbiased, non-judgmental audience: a shelter animal in need of some company. Once 4 Paws is established in its new digs, young students from around Madison County will be able to sign up to read to a dog or cat; Hammerbacker says the program is so popular, she’s already had several calls to sign up at the new facility.

Hammerbacker doesn’t yet have an expected opening date for the new space, but preparations will begin as soon as possible getting everything prepared for 4 Paws’ bright future. And soon, once the dogs and cats have vacated, Hammerbacker’s car will be allowed back in its garage.